Much as I try and catch up with my Blog the fine weather conspires against me - yes I can't resist a quick spin in such gorgeous weather. If the choice is sitting at my computer on a hot humid day, or cycling around the countryside then cycling wins every time. Unless there is work to do of course that trumps the weather. The weather has been pleasant rather than very sunny - so I have not bothered with sunscreen for the past couple of days. I do carry some with me just in case though.

The Cambridge Guided Busway is back in the news (and the News). The Cambridge News reports: "growing fears that guided buses won't run until 2011". Indeed today when I went to the front page of the Cambridgeshire County Council website it was their front-page news. When they move it you should be able to find the Press Release here - they must be announced they had shouted their headline in capitals.They have an upcoming meeting to report on progress (or lack of) which you can find on the link. (It is a Word document at the bottom).

Just to remind ourselves. The original target for completion all the of the CGB (North and Sound) was February 2009. When this looked improbable the North and South sections were going to be de-coupled. This would have the benefit of reducing any liquidated damages payable by BAM Nuttall on over run of the whole project. However finalisation of the de-coupling was not reached because it relied upon agreement being reached on six issues on the Northern section. It now looks as if both sections might "join up" again - and be completed at the same time - in early 2011 - about two years late.

It is interesting to see that the problem is being addressed almost as a PR battle - the council are keen to tell us that there are liquidated damages of £14,000 damages being subtracted for each day the completion is delayed by. I wonder if that is the only sanction - the contract could bind both sides to this form of damages and prohibit injunctive relief (going to court). If that is the case it is not impossible that the actual subsidiary doing the work could go bankrupt or be allowed to go bankrupt. Apparently there is some sort of guarantee or bond from the holding company - but does it come into play in the case of bankruptcy? Someone

The only positive out of this is that with the delays then cyclists have an alternative unused concrete track to cycle along. The bus companies are clearly not happy "Stagecoach threatens to run fewer services due to delays". They have invested money in buses and people. It also turns out that their original service planning was based upon a new town, Northstowe being built - but this could be delayed and so would hit their user predictions.

The last time I went along the CGB I was surprised at the weeds growing between the tracks and the holes being burrowed there near Oakington by animals - it is a reminder that the path of new technology is generally never easy.

Onto some cycling - the last day was just a quick trip around the Fens (the main ones being White Fen and Wicken Fen). The crops are still doing nicely - these spuds are in flower alongside the A14 where the Sustrans 51 goes underneath it through a tunnel. 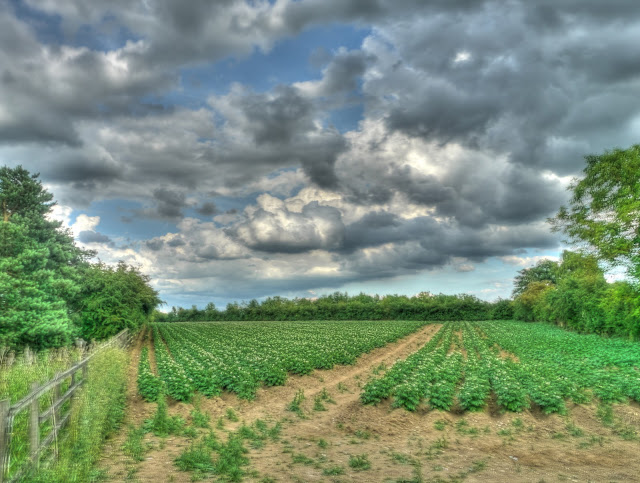 After Swaffham Prior I turned off and headed down the main road, but on the cycle path towards Lode - this was a late change of mind about where I was going - there are two other shorter routes I could have taken. This is what greeted my as reached the Lode crossroads - White Vans men - all over the shared use cycle path. 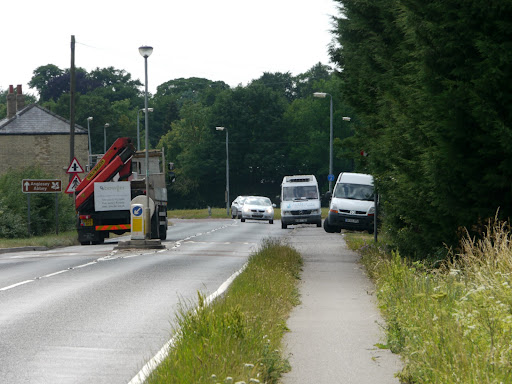 This is Meadow Cranesbill (Geranium pratense), I think. In my Collins book the leaves are a good match and the seed pods look very similar. The are described as having a "long beak" - which is the case in the photograph.

Have I also mentioned how noisy cars are - is my hearing getting more sensitive (which I doubt) or are the tyre noises of speeding vehicles becoming more unpleasant or is the road surface getting worn and noisier? 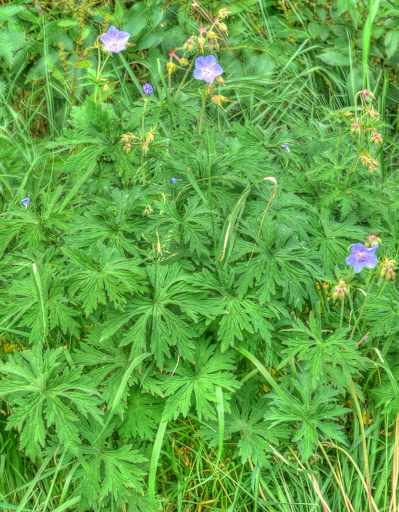 This appears to be Wild parsnip (Pastinaca sativa ssp. sativa) - which if you follow the wikipedia link takes you to the Parsnip page. 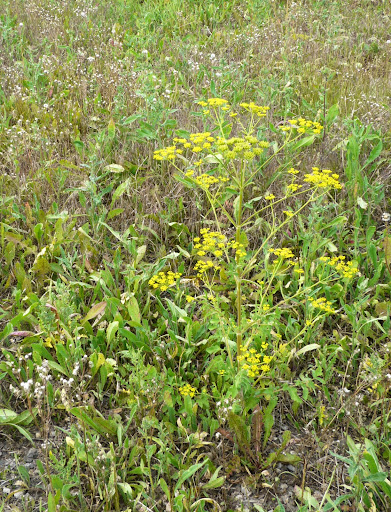 I took a closeup of the flowers just in case and it matches another website - floralimages as well as the picture in my book. 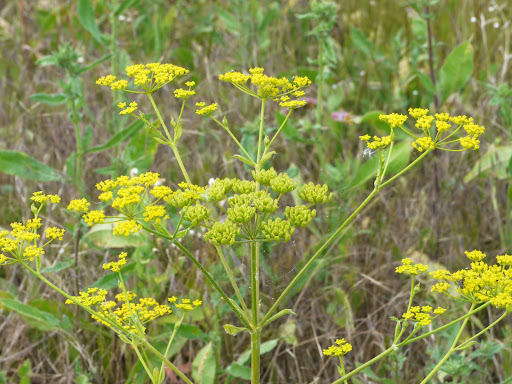 A couple of rides ago I mentioned the picnic tables on White Fen This picture was taken from the Lodes Way bridge over Swaffham Bulbeck Lode. It overlooks White Fen and you can just about make out the two picnic tables on the right hand side of the picture. 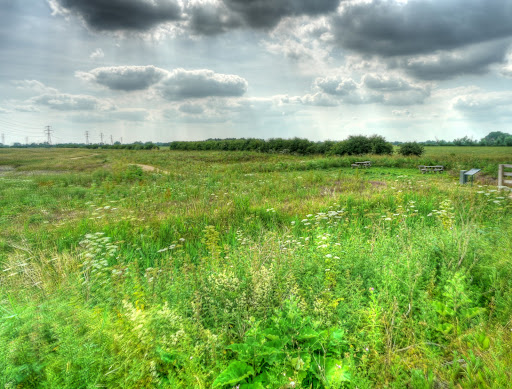 On this ride I zig-zagged a bit and ended up cycling down the Upware Road into Swaffham Prior - this Sustrans 51 sign must have been a left-over remnant of the early history of 51 route, perhaps before it got routed through Wicken Fen it was going to go to Ely. Not that the idea makes sense since 51 heads for Newmarket (and Ipswich). Perhaps it was put up to let cyclists know that there were just about to join Sustrans 51 at the T-junction ahead. Actually I like the idea that the route should be signed and that there should also be nearby signs pointing to places to access the route. More than once I have accidentally strayed off a Sustrans route and found it extremely difficult to find my way back onto it. That is because I hate to back-track and so generally continue on the the rough direction.

When over at Reach I normally join the Straight Drove byway in the village - this time I cycled along the byway from the oitskirts of Reach past Spring Hall and Water Hall. At the corner of Barton Drove and Little Fen Drove - it always surprises me, but shouldn't that, how different a place looks even from only a small change of perspective. 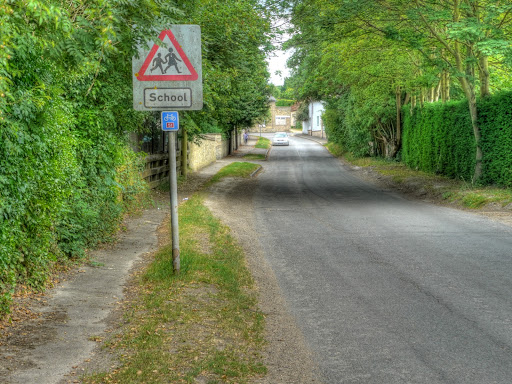