Last Sunday I cycled a loop taking in byways and roads around the village of Carlton and on checking the map to see where I had been I noticed a byway between a nearby village - Great Bradley to Kirtling and then another bridleway up to Little Ditton (which is just down the road from Woodditton). So I thought I would give it a go this time, I needed a longish cycle ride having not been out for a couple of days.

My route is shown below and is available on this link at BikeRouteToaster (BRT). The distance is around 70Km with around 290m of ascent ascent/descent and reaches the dizzy heights of 122m above sea level. This being the Fens the lowest elevation of the ride was only 1m above sea level. As usual I tend to intersperse bits of country lane riding with byways and bridleways. That way I can maximise the car-free experience whilst still managing to cover some distance. For this ride I did print out and highlight my intended route - but when I am cycling I don't always check the map until too late so I did get a little lost once or twice. So the route shown is the intended route rather than the actual route. My route was a few kilometres longer! Also when on the byway between Great Bradley and Kirtling I think that I followed a path at one point rather than the byway, oops. It was also necessary to go down a short path at Kirtling as the bridleway stopped short of the road - carrying the bike of course!

The route was fine on my Hybrid - although bits would probably be more of a challenge when wet - the road from Great Bradley is probably called Water Lane for a reason.

When producing the BRT trace a few of the byways were not shown on the OSM map so I used the Hybrid view showing the Satellite view and I traced the track I took. The route heads out towards Great Wilbraham and then takes Mill Road which seems to be a rat-run road to the A11 dual-carriageway. It does go over the A11 though and on towards a Quarry. The bridge over the A11 is single-track and light-controlled and you do get some big lorries heading towards the quarry. There was nothing around when I cycled along it and the Traffic light sensors switched the lights before I got to them. The quarry looks a bit intimidating, there is a sign showing the byway in one direction and the bridleway in the other, you take the first left after the right turn, with Quarry on either side - the byway climbs from around 30m to 70m. 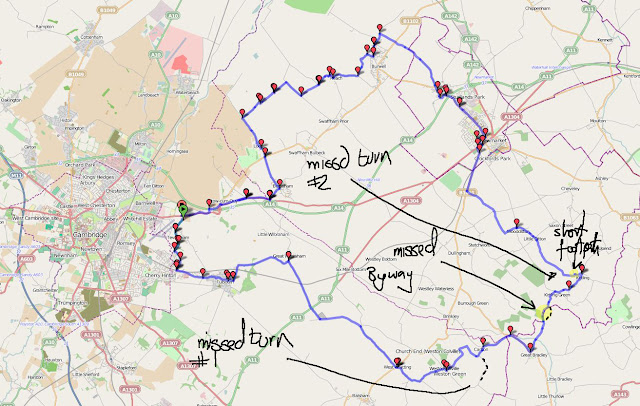 This is the view from the top of the hill - well near the top of the hill - around here there are a few pine trees along the hedgerows and it looks a bit like Breckland. Although the weather forecast hinted that there might be the odd shower and the clouds looked dull I wasn't convinced. I did wear my fluorescent yellow jacket just in case. 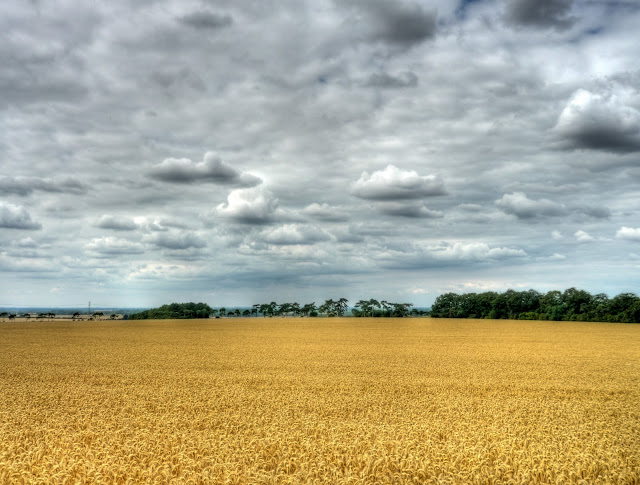 I had intended to cross the Six Mile Bottom Road and use a "yellow" road instead - but I forgot and climbed up the hill towards West Wratting before turning off towards Weston Green crossing the Ford and heading along byways to Carlton. (I'd come this way in reverse the last time.) The byway wiggles a little bit before heading to Carlton This is the final leg of the "Carlton" byway - it is a pretty reasonable track - flat and not too soft. 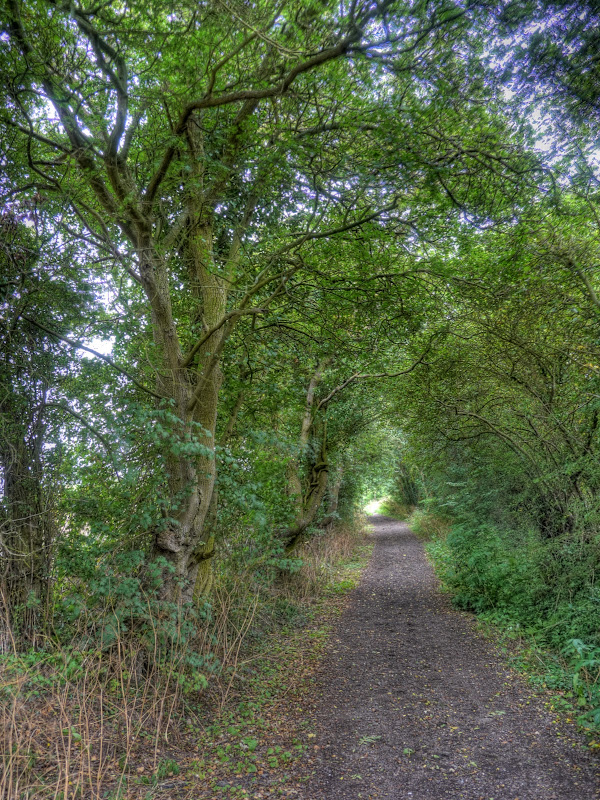 After emerging onto roads next to Carlton church I thought I knew where I was going and took the wrong turn. After a few kilometres I looked at my GPS and wondered why I seemed to be heading in the wrong direction! If I had printed out a bit more of the map of the area I could have looped back around - but I hadn't so I turned round back to Carlton and took the right road to Great Bradley. Just as you enter the village there is a left turn along a no-through road - Water Lane. If you follow the link you will see that Google have blurred the road sign or at least the "Water" bit of "Water Lane". Google in their thoroughness have even taken their Streetview camera along Water Lane at least until the Ford. Being an intrepid cyclist I braved the rushing torrent of water and cycled through the Ford. Actually the raging torrent was more like a trickle as you can see in this picture, which looks back towards Water Lane. 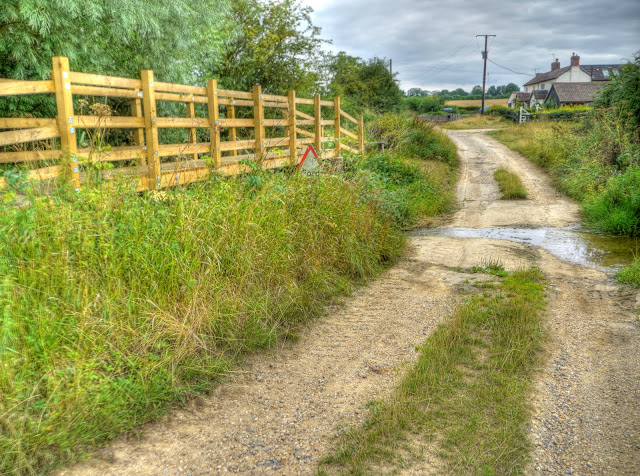 The route becomes a track and despite the dry spell we have been having there were one or two quite large muddy puddles along the way. There was a water course alongside the track with what looked like Weirs. It turns out that this is part of a Water Transfer Scheme - The Ely Ouse-Essex Water Scheme - completed in 1972 it diverts water from entering the Wash and out to sea up near Kings Lynn using pipes, pumps and this "Stream" Kirtling Brook. According to the link 400 million litres per day are pumped from Kirtling. This is set to change in 2014 when a pipeline will either augment or replace Kirtling Book as the conduit for the water. The reason is that they want to increase water flow to an expanded reservoir, but without causing environmental damage by having torrents of water running down the brook. This is Kirtling Brook looking south. 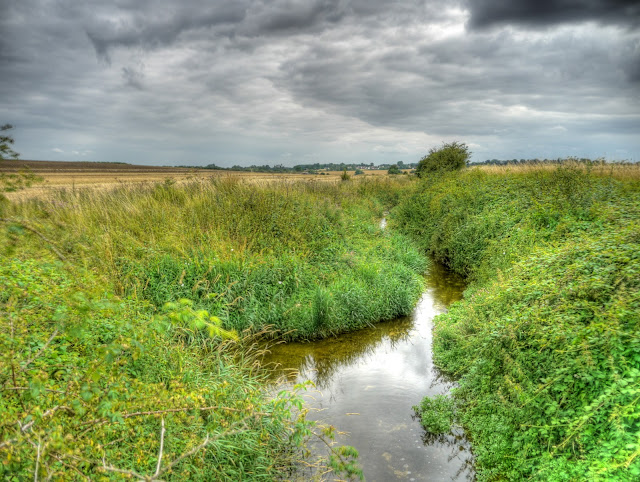 There are some interesting patches of old woodland around - but trees are dying - I am not sure what the dead tree in the picture is though. The wood is Lopham Wood I think. 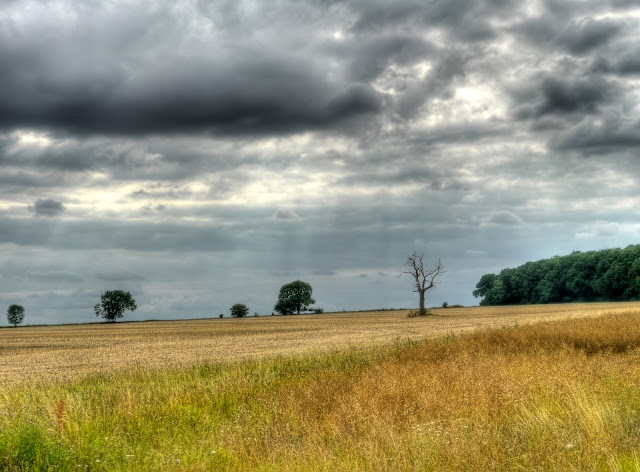 This field on the other side of the track has been combined, cleared and is being ploughed ready for the next crop to be drilled. 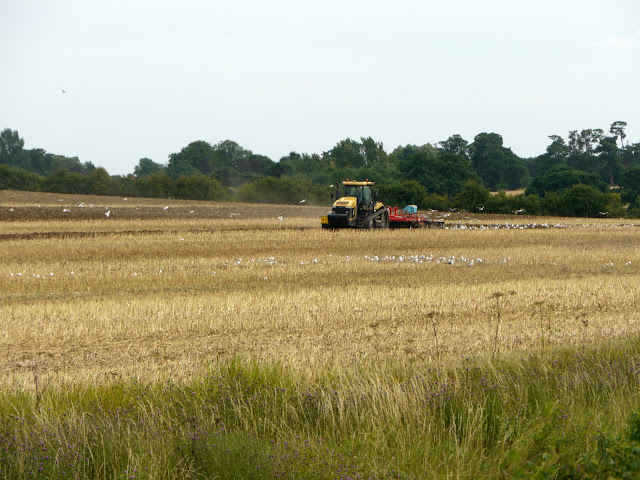 As I mentioned above I followed a footpath at the last section of Water Lane but both cross where the track becomes a road again and joins the Woodditton Road at Kirtling. I turned of the road along a Byway as a short-cut through the village. I did stop to take a picture of the Kirtling (and Upend) village Information Board. A map with some pictures of some paw-prints to help identify animals in the area. 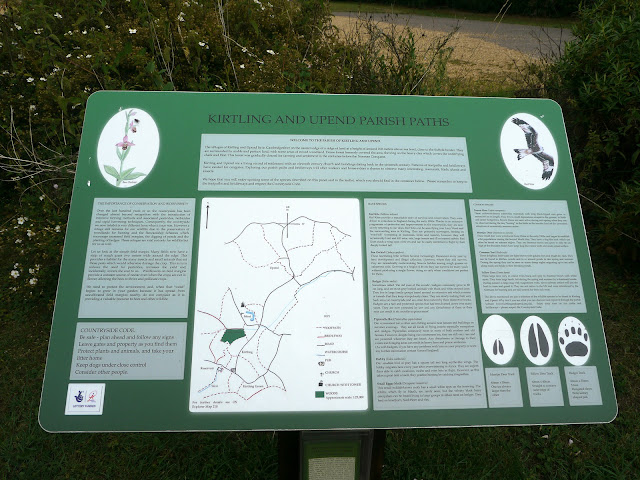 My plan was to pick up a bridleway near a wood called Lucy Wood to the North of the village. The bridleway is quite a long one but strangely does not seem to quite reach the road. Instead it ends just short with three footpaths leading off. It always surprises me when a bridleway appears to go nowhere. I would have thought that rights of way came about because they were working routes of old. So when one stops short, especially a long-ish one it makes you wonder. The bridleway seems to be a decent working farm track. Whilst cycling along it I assumed I would carry straight on. Once again I did not bother checking my map. This picture shows the choice - I was a little surprised to see a sign almost overgrown on the verge on the left - "No Horses" Humm, no horses implies that it isn't a bridleway, which means I was taking the wrong route. I carried on for a little bit to find that the track then headed North-East - I was definitely going the wrong way. So I turned back.

I stopped back at the "junction" and a quick check of the map showed me the error of my ways. The correct way looks more like the bit of track I had come from. 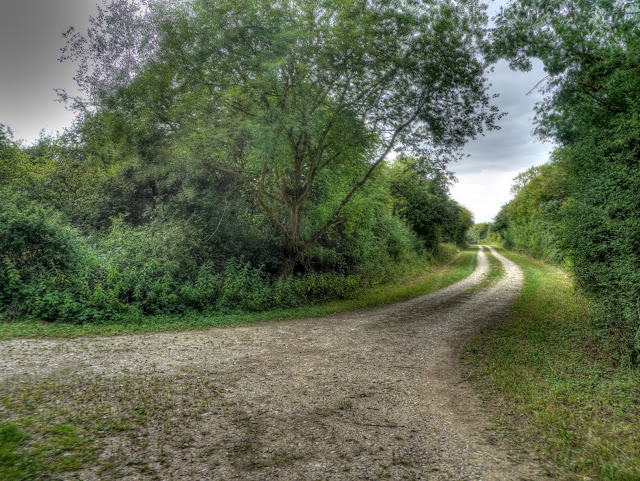 If anything the track got even better. There are Stud Farms around and I assume they help maintain the quality of the bridleway as a route for exercising horses. As I was cycling up the track there were three large deer ahead. They scampered along for a while before turning off through a gap in the hedge where they seemed to disappear! 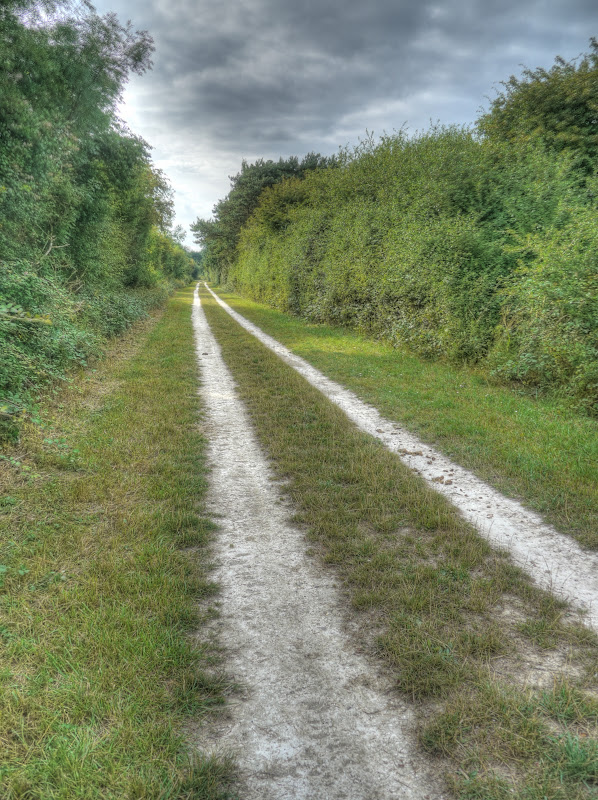 The bridleway then picked its way through a couple of Stud Farms and the track became a sand track. The going was good though, it was firm sand. There were a few people about riding horses, jogging and dog-walking. 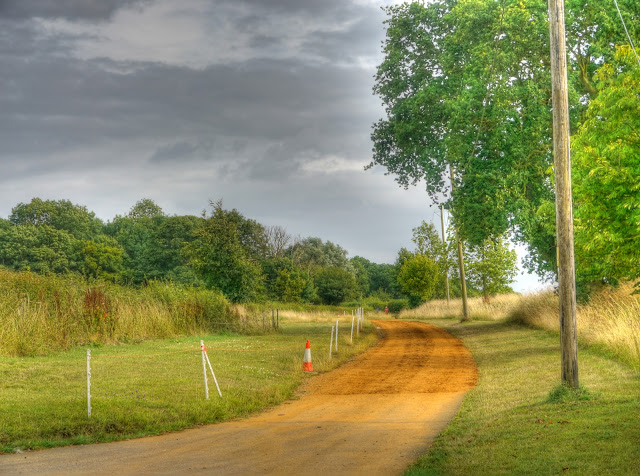 The bridleway became Parsonage Farm lane and I went across a crossroads onto Maypole Lane and then down a track to join a bridleway between Woodditton and Newmarket. This was one of the higher points of the area at 105m, with good views down to the Devil's Ditch. 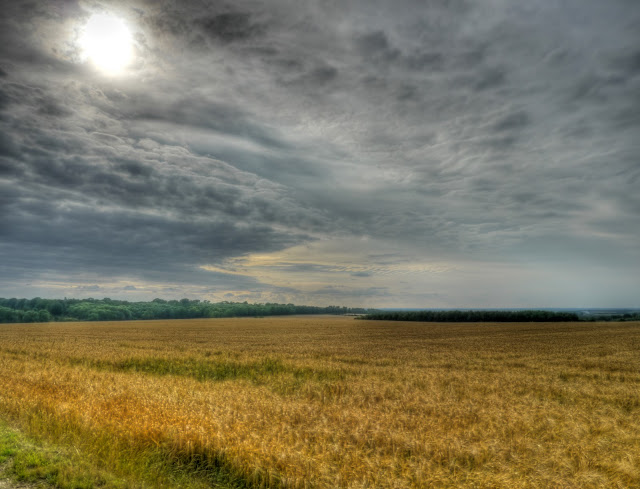 This is the view of the track made up of three pictures stitched together. The track to the left drops down the hill and then meets the Woodditton to Newmarket bridleway.

Down at the bottom of the track (Dane Bottom) it looked like there was a field of Oil Seed rape just coming into flower. 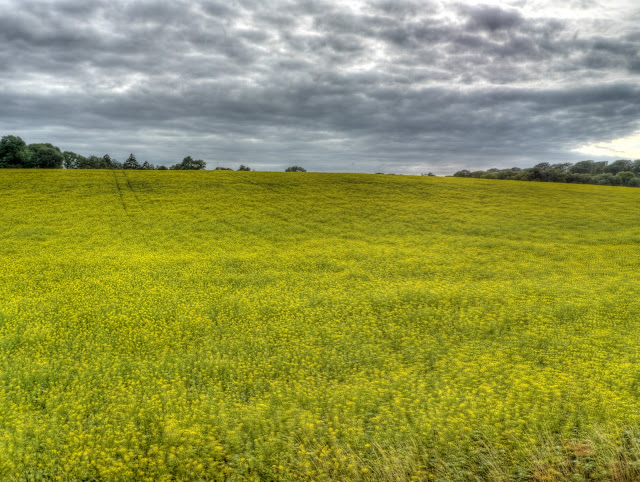 My route at this point was similar to the last time I cycled this way. I did have a moment when cycling along North Street in Burwell - which is part of Sustrans 51. As is to be expected with small village streets there were cars parked by the roadside. As I was cycling along, my side of the road was clear. There were cars on the other side and as I was halfway past the obstruction a green van coming the other way with two young lads came straight at me. They did not slow down and forced me into the kerb shouting abuse as they went by. It makes me think I should start using a video camera on my handlebars - that form of bullying should lead to a ban from driving. It is basically a form of assault with a deadly weapon - pure and simple.