Although I am a bit behind on my Posts - this is part 1 of my Saturday ride I do have the photographs loaded onto several draft posts waiting for some time and text to catch up with them. Cycling has also been in the local news again - with the topic of the County Council's role in promoting the use of cycle helmets continuing - first a councillor (Colin Rosentiel) opened the debate by pointing out that there is scientific research indicating that cyclists wearing helmets might increase of being in an accident - "Fresh debate over safety of cycle helmets". There has now been a riposte with "Councillor told to use his head over helmets".

Andrew Gardner CEO of Headway Cambridgeshire has suggested that a "common sense approach should be used" and asked "Does Cllr Rosentiel believe car drivers actually drive closer to cyclists wearing helmets than those not wearing them?...". It is interesting that we have the CEO of an organisation that one would hope would operate with an "evidence-based" approach to the assistance of people with brain injuries seeming to imply that the common-sense is more important than research. There are quite a few times when Medical science has wrongly ignored the evidence in support of common sense. The most amusing bit though is the comments section - there are loads of them. Only to be expected in a place like Cambridge where feelings about cycling run high.

A quick search of the web also throws up quite a few websites devoted to the topic. The difficulty is in finding facts rather than anecdotes. (www.cyclehelmets.org, wikipedia on bicycle helmets, www.cycle-helmets.com ) I can't help feeling though that part of the pressure comes from "beleaguered car drivers" - they are "forced" to use seat belts and obey traffic laws, get stuck in traffic jams and resent the freedom that cyclists "enjoy" and that it is the cyclists fault for taking up such a dangerous activity. They probably also resent being blamed for the danger that cyclists perceive from motorists.

Cycling has also been used to promote the Male Cancer Awareness Campaign with "Cyclists strip off to expose cancer fears" - they weren't actually naked but used flesh coloured Lycra to be eye-catching. The two cyclists doing the Land's End to John O'Groats cycle ride for the Arthur Rank Hospice also completed the 900 miles in around 70 hours of cycling and with some pain and injury - well done to them.

One aspect of the "traffic management" in Cambridge that has been successful is the provision of Park and Ride car parks around the city. They sometimes suffer from the fact that there aren't bus lanes right into the City from each of the locations, they do seem to work though. When I pass through the Newmarket Road Park and Ride car park (Sustrans 51 passes through the middle) there are often bicycles parked there and there are bike lockers provided. Apparently there is now concern that some people use the Car parks but shock - either walk or cycle to their destinations without paying their way - as reported in "Will park and ride drivers be charged twice?". It would seem that although the original premise was to reduce congestion in Cambridge there is now a focus on getting money. Apparently Norwich bans parking by non-users of their bus-system.

Enough of the news - back to my Saturday ride. I have mentioned before that I find the Cambridge Guided Busway (CGB) cycle path a pretty good way to get out of Cambridge quickly into some wonderful countryside. For this ride I planned on popping out of town on the CGB and then back via Hilton and various byways. The route is shown below. At first I was going to call this "Cycling to the danger-zone" - anyone remember Top Gun? We have not had that much rain over the last week - at least judging by the garden, fields and mud tracks that I cycle along. So I was appalled to see that the "floody bits" of the CGB up near St Ives seem to be reappearing. In fact I wrote a Post about it. So I won't dwell on the issue in this post - but I will leave the pictures in.

I picked this route after cycling out on the CGB and back via Conington and thinking it would be another interesting way back to Cambridge on some reasonably long bridleways in the countryside. I had not fixed the route when I set off - but took a map with me so that I could pick and choose depending upon the local conditions. I did get lost in Cambourne - they seem to have lots of cycle paths - good, but very few signs to show where they go. I also cycled through the middle of a Rifle Range - not in use at the time of course - which was a strange experience.

I did not plan on taking many pictures when on the CGB because it was a means to an end - getting some reasonable distance out of Cambridge before starting my cycle ride proper. Even though the wind seemed to be against me the route is actually quite fast - well faster than when cycling on a road with junctions and parked cars and moving cars - you get the picture. I did stop just after crossing the road between Longstanton and Willingham though. If you follow the link it is a Google Streetview picture form the road - this building was part of Digital Park in those pictures. It looks rather derelict now though. When I lived in Willingham I think it was part of a plant breeding operation - but am not sure. 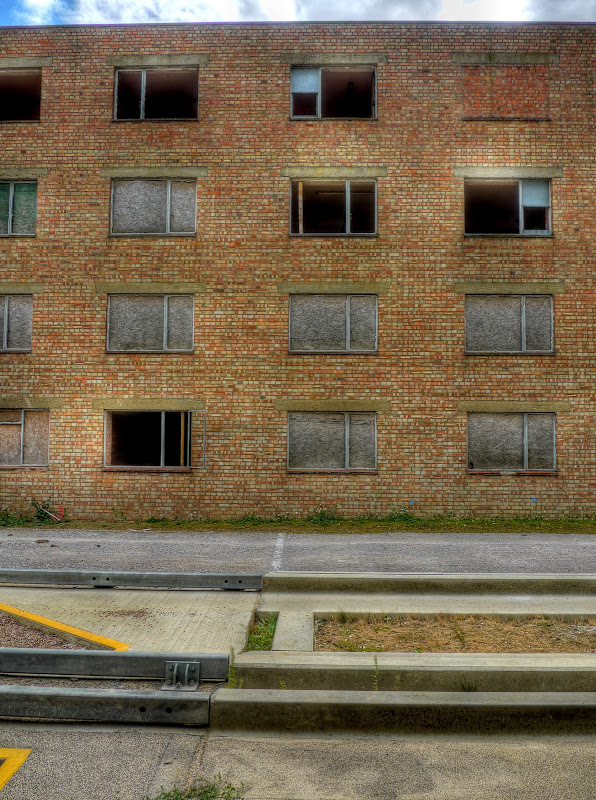 This building is alongside the previous brick building - it is even more derelict - in fact I am surprised that there has not been any graffiti-ing. 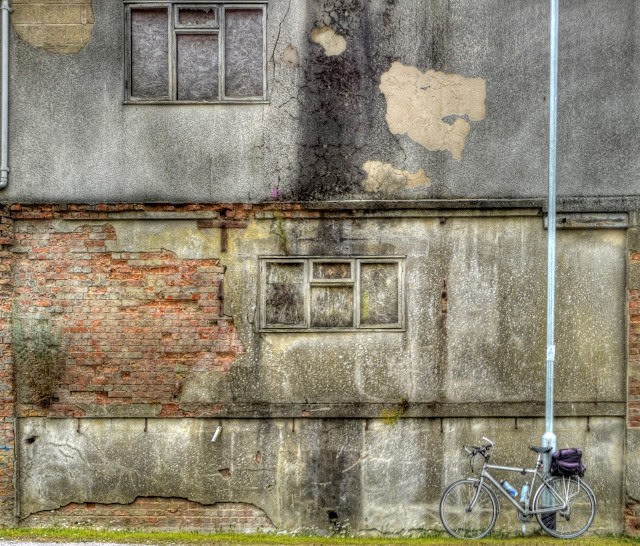 I altered the perspective of the last picture - not in any great way. I took the picture sitting on the concrete track to try and keep the camera still for the 7 exposures . So I was looking up at the building which meant the picture had a strange lean. Photoshop Elements has tools for correcting the distortion with I used - the result isn't perfect - but if you compare it with the un-corrected original below you can see it helps. Well I think it does. 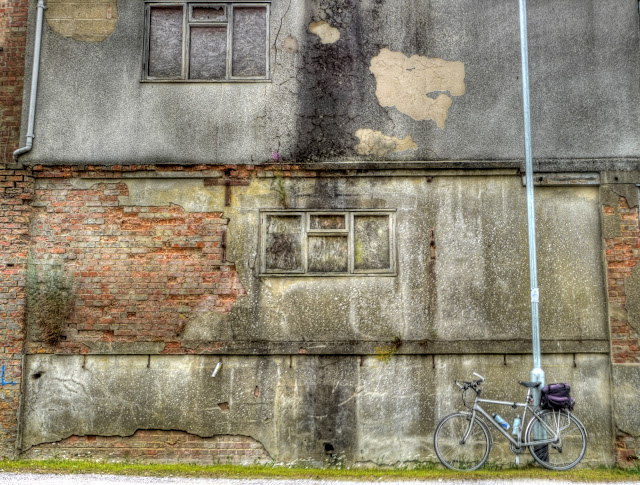 The CGB is quite popular - not as popular as the Bristol and Bath cycle path yet - but I always see cyclists on the route. The majority tend to cycle along the concrete tracks as you can see here. The cycle path alongside has two thin smoother lines worn by passing cyclists - which are the favoured places to cycle. The advantage of the concrete tracks, apart from being much smoother, is that they make it easy to cycle side-by-side as there are another two tracks for oncoming cyclists to use. 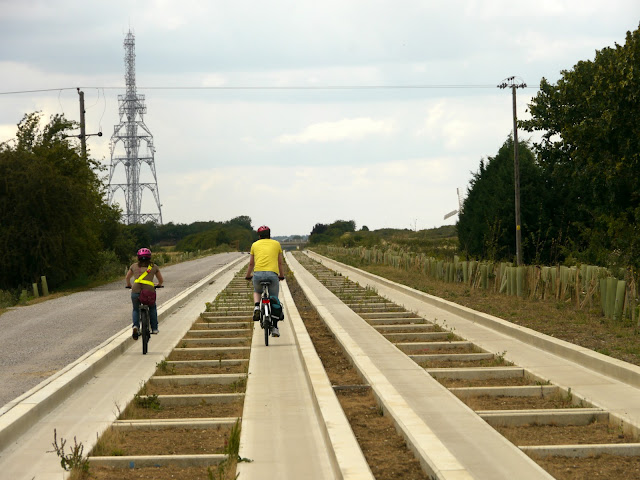 I won't dwell on it - check out the Post where my rant is a bit louder - I was surprised to see the cycle path with recent mud on it. 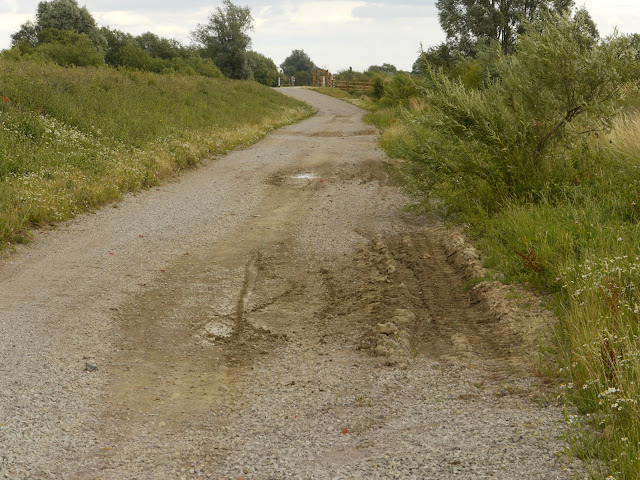 As I made my way along the CGB the next bit of dodgy path was even worse. A bit of care was required to get through this bit. 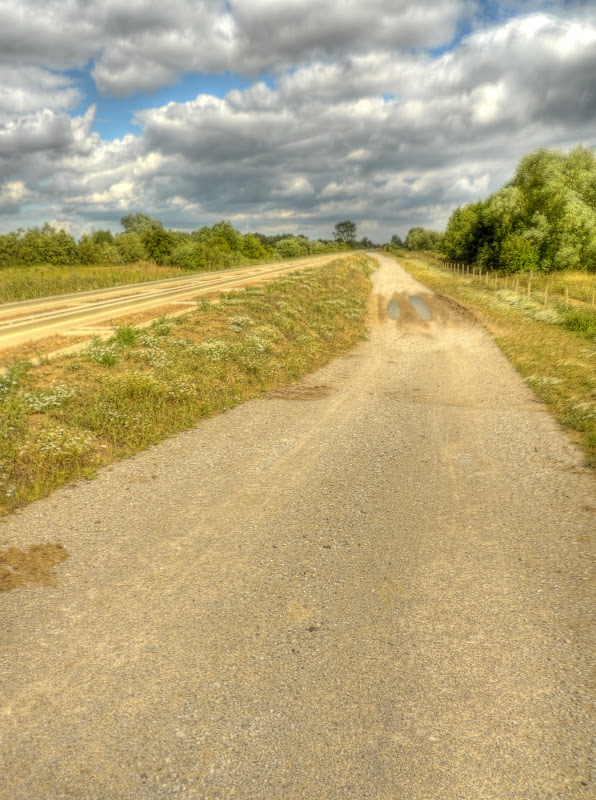 A close-up - they seem to have created water traps on the path if so much water collects after a few brief showers. It looks as if there has been some "maintenance traffic" as well. 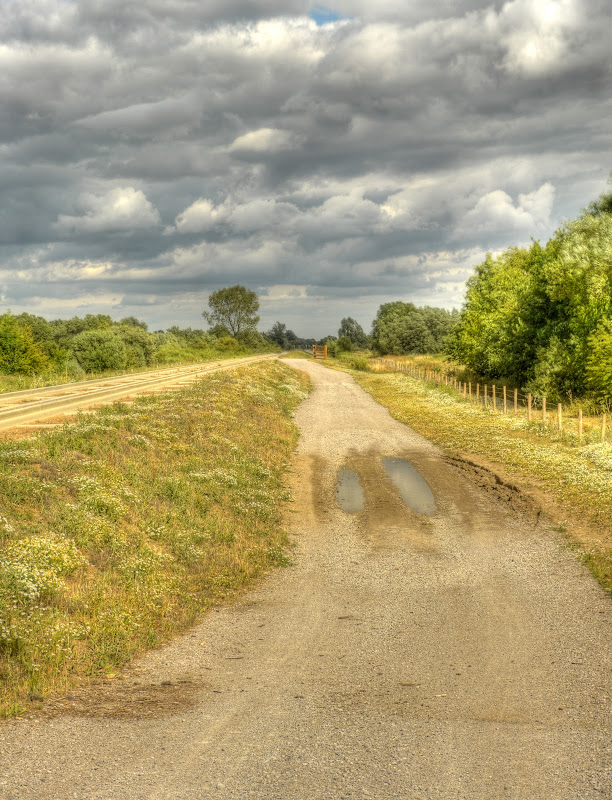 Inevitably I reached a part of the path with flooding right across the path. They seem to have created additional lakes rather than a high-quality cycle path - perhaps they are for wildlife diversity. Clearly something has changed if the assumptions about how few days the path would be flooded before it was built are to be believed. 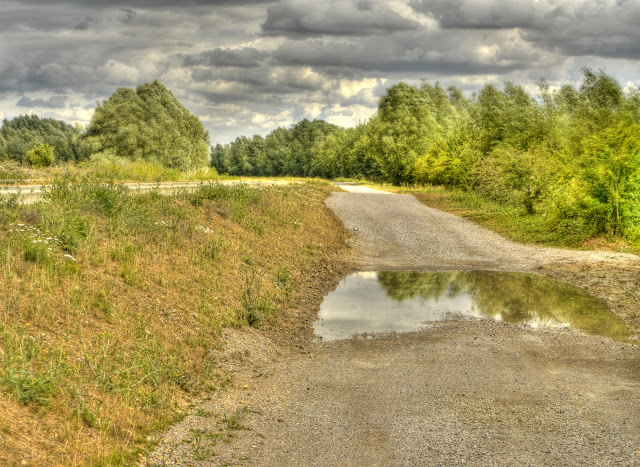 I was hoping that I might be able to identify the type of plane from this snatched photograph. I thought it might be a Mosquito - but no, the nose looks wrong. I am not sure what the "AI" denotes - Airborne Interception is one possibility. The last time I used to be interested in aeroplanes was when as a young boy we would go on holiday and if it was wet build Airfix models. Later on, when I became interested in "Chemistry" we would blow them up using fireworks - bangers actually.

UPDATE: I have managed to track down the type of plane - I think. When I zoomed in there was a Pegasus on the side of the fuselage at the front. The plane is a Douglas C47 (DC3) Dakota ZA947 and wears the livery of 267 'Pegasus' Squadron. If you follow the link there are some additional images. The plane flies as part of the Battle of Britain Memorial Flight. 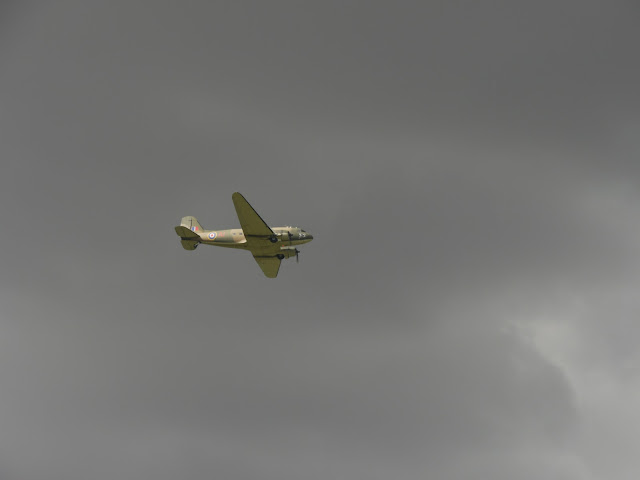 This was the track I took leading off from the CGB through to Fenstanton (Fen Lane). It is shown as a track on the OSM Cyclemap which is why I planned on cycling along it. It turns out to be a footpath - so I hiked instead. Next time I will use the the Holywell Ferry Road (a byway) The route I took crossed the Sustrans 51 route through Fenstanton and passed under the A14 by way of a subway. I guess that when they upgraded the road it ended up cutting Fenstanton in two and there is one bridge over the A14 and looking at the map two subways. The subways are only wide enough for pedestrian traffic though. (Pushing a bicycle through is no problem.) 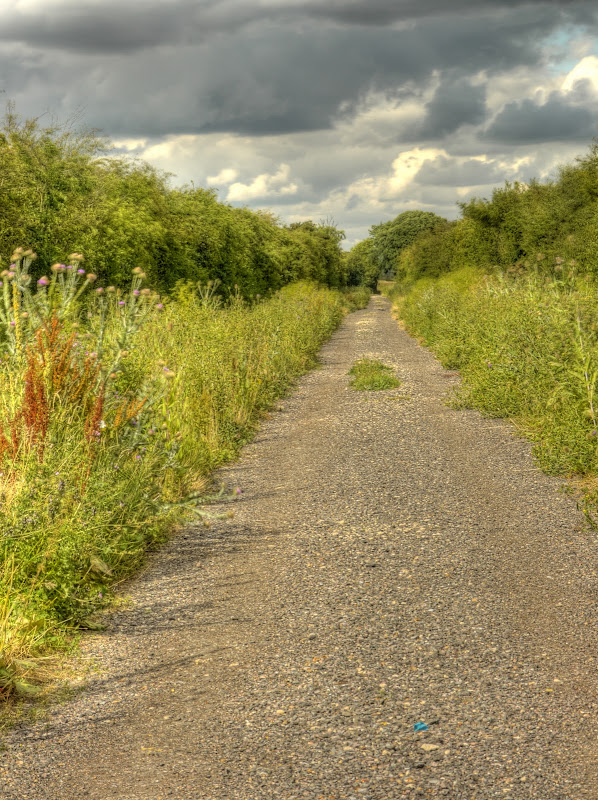 The subway led out onto the Hilton Road and into Hilton, a small village with a Turf Maze. The village has a large green and the byway I wanted was at the end of a short no-through road past a few houses. At one point I got a little confused as there appeared to be an extra path - which turned out to be an extra path - a permissive path. The start of the byway was signed - but after a while the signs stopped and there were just tracks amongst the fields. Although these were byways apart from at the start they were pretty good, bumpy but not rutted and rose up a small hill to around 50m (from 10m above sea level). 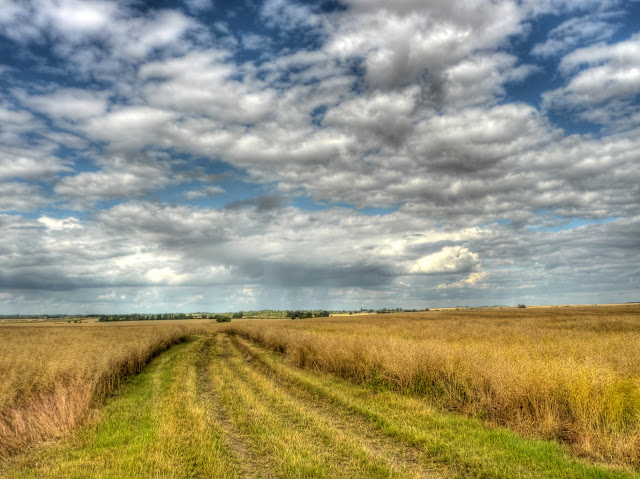 As the hill rose the countryside seemed to get larger and larger with fields stretching out in all directions. The crops all looked as if they were ready for harvesting. (On the turn my son tells me!) Occasionally the clouds started looking a little darker - but no rain came down. A good job the CGB might have been washed away! 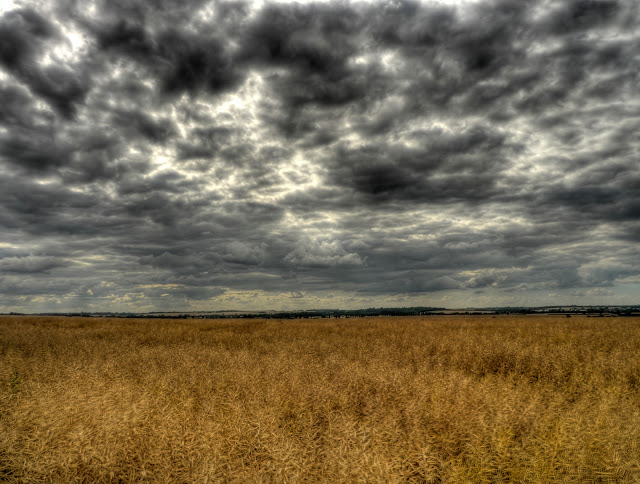 The track did meet another farm track I took the uphill route -there weren't any signs and so I did a quick check of the map - a good job I had taken it. The byway reached a road alongside a farm according to the map..