September 28: This is definitely a route I have taken before - available on BRT here. It is a little over 50Km/ 30 miles and no hills to speak of. After looking at my total for this month I though it would be a good idea to use the Cambridge Guided Busway (CGB) to get a bit of distance under my belt and hit a total of 1,000Km/ 625m for September- all being well over the next couple of days. This route is a good one to get a bit of distance cycled as it is quite fast and I know it well enough not to worry about getting lost! It was also warmer today than yesterday and very little wind to speak of so I reverted back to wearing shorts to cycle in - a good choice. (It was around 16C so I still wore some socks and long-fingered gloves. I am not sure I really needed to though.)

No sooner had I returned and loaded up the pictures onto my Computer than the CGB appeared in an article on the Cambridge News Website: "Council starts own guided busway inspections". Perhaps I ought to offer my services. Apparently there is concern that there might be other hidden defects and despite the Contractors not providing Construction Certificates the Council feels the need to push ahead in case there are problems beyond those already identified. 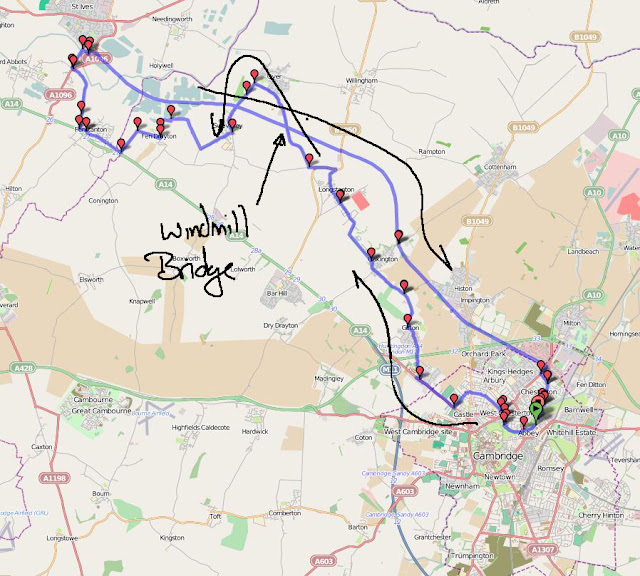 Before I set off there was a spider hanging in a web outside the window so I took a picture of it just hanging there. It was the other side of the window, so it was not well-lit and life was to short to try the flash out and there would have been glare reflected back in any case. Next time I will try to do better! 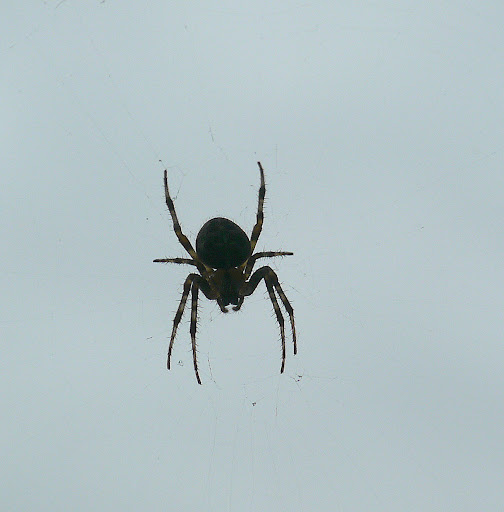 My route takes my along Gilbert Road where there were 14 cars parked in the Cycle Lanes - if anything I think Cycle Lanes encourage cars to park there. There even seemed to be a couple of cars for sale parked along the road. Then I followed NCN51 between Oakington and Longstanton, yes the one banned to motor vehicles. Whilst cycling along the banned bit, three commercial vans and one estate agent's Smart car passed me and one car was parked up with the driver reading a newspaper. So the clamp-down has had an effect, but there are still vehicles using it. I also passed three cyclists, although it is not statistically sound, I am convinced that I have seen more cyclists use it after the police clamp-down. (I also saw cars heading in that direction when I was either side of the actual banned bit, which are unlikely to have vanished or driven off across the fields - but I did not count them. The road has, as been commented on by the Cambridge Cyclist (see previous link), got some nasty potholes.

After Longstanton I took the Over road rather than the NCN51 route, it climbs up Windmill Hill past a Communications Tower and Windmill. On the way I passed this burnt out car - my guess is that it was stolen and then when they had finished with it the thief (or thieves) set fire to it to destroy the evidence. This one seems to have survived better than some cars so I could be wrong and it might have been a spontaneous car fire. The number plates look as if they were removed though. 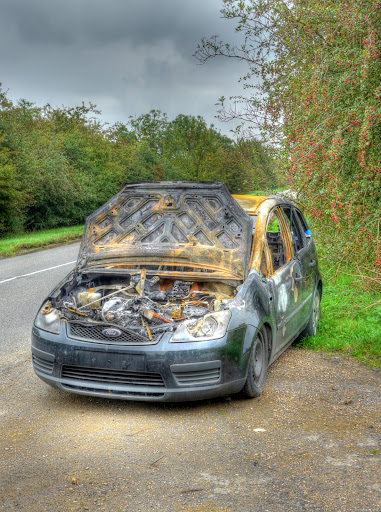 The view of the CGB from Windmill Hill Bridge., as you can see it was a grey day. Cycling past the CGB on the Over Road between Swavesey and Over I noticed a red sign indicating Bridge Closed. I was not sure which bridge but thought it might be the one over the River Great Ouse near St Ives. I decided to cross that bridge (or not) when I came to it. There were alternate routes via Fenstanton I could back track back onto the CGB. 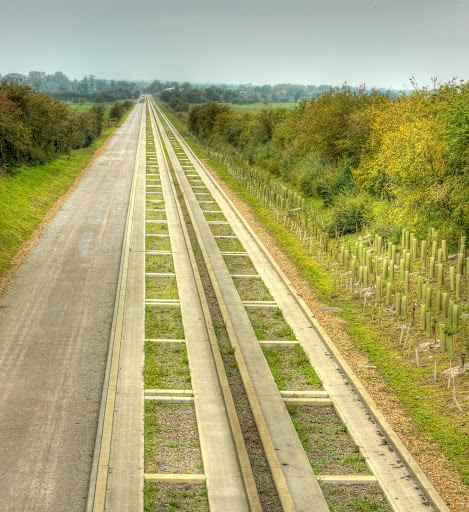 After getting back onto the NCN51 in Swavesey I turned off onto the Fen Drayton Lakes Nature Reserve. This is the Trout Pond I think. For an area that gets easily flooded it seems a bit short on water. 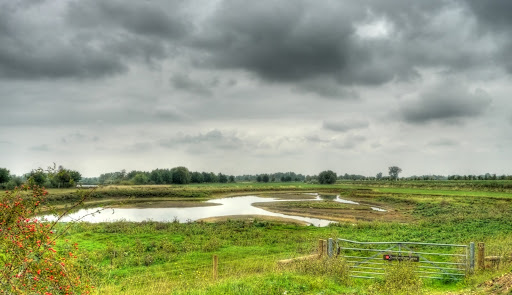 The Reserve started as Fenland then was Farmland before being quarried for sand and gravel. The lakes are man-made as a result of the extractions. It became an RSPB reserve in 2007. 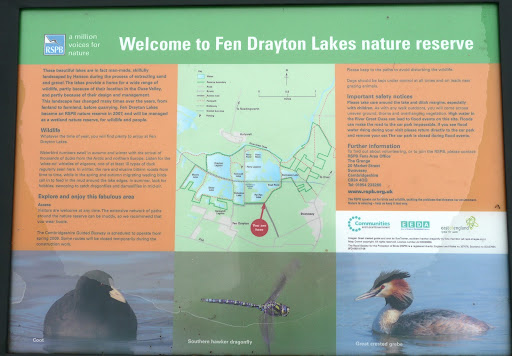 At the time I crossed the busy roundabout on the outskirts of St Ives it wasn't the rush hour and I got across with hardly any waiting. Fortunately although the CGB is not operational the traffic lights built where the CGB crosses into St Ives are so crossing back over the busy Harrison's Road was also straight forward.

I stopped to take a picture of this Pill Box opposite the St Ives park and ride car parking area. These are part of our History I wonder if they qualify as worthy of preservation? 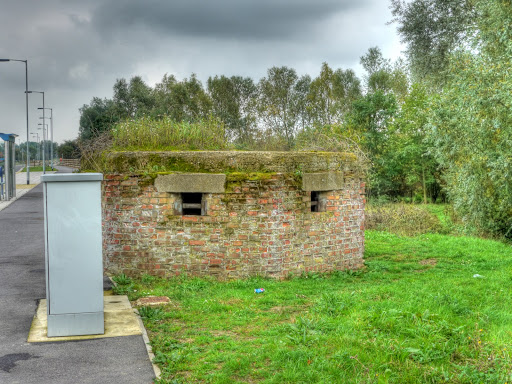 This is the first lake you come to after travelling along the CGB - it seems to be nameless on the OS and OSM maps. 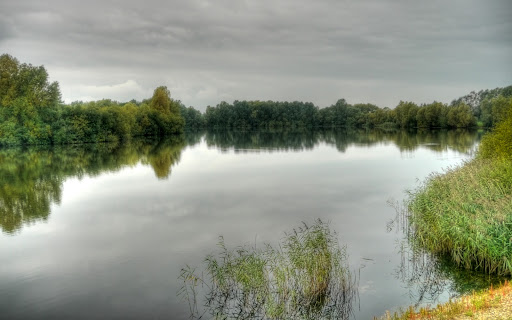 I rather liked the simple reflections of the trees on an otherwise grey background. 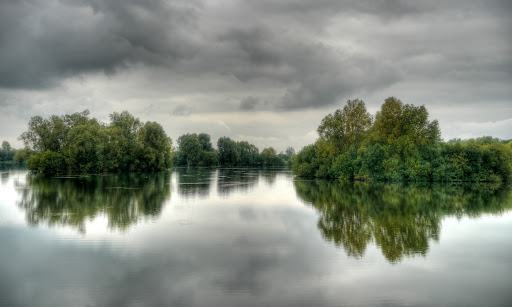 Yes the closed bridge was (actually will be) the bridge over the River Great Ouse. the piece of paper stuck to the sign indicates that it will be closed between the 4th of October and the 4th of November. It is good that some warning is given, I wonder if there will also be a diversion signposted when the time comes. A search of the Internet did not throw up any reference to this closure (well not one I could find quickly anyway). I assume it will be either to allow the aforementioned inspections or more likely to fix the problems - section 1.4 and 2.2 - 2.5 of this word document. On reading the document it actually refers to the bridge as the River Great Ouse Viaduct (with expansion joint issues). paragraph 2.5 suggests that BAM Nuttall will order and install the required joint. I guess this is when they will install it (or them?). The Viaduct weighs around 2,700 tonnes and sits on eight large concrete supports . The old one can be seen here. An interesting report with some detail on how cost overruns are to be shared, courtesy of www.noguidedbus.com. 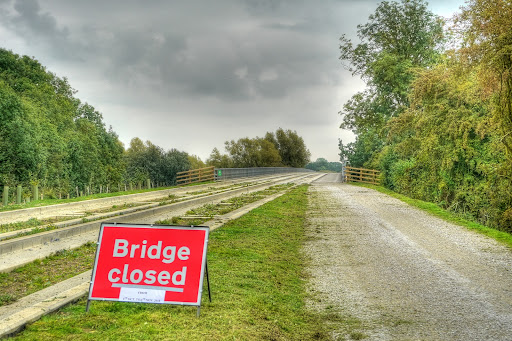 The high quality cycle way - looking back after I cycled through it. The path gets easily chewed up by maintenance vehicles and requires care to cycle along at this point. 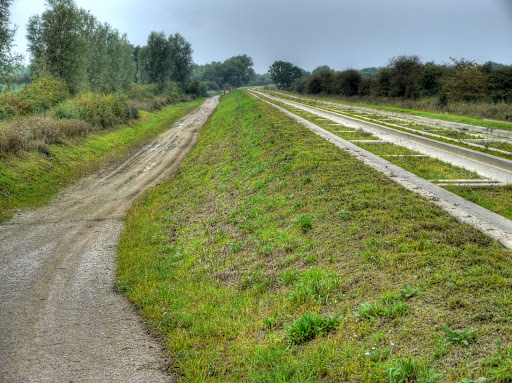 The high quality cycle way has been fitted with sheep dips to ensure that visitors bringing their flocks of sheep to market in St Ives along the CGB don't bring any nasty diseases. I cycled along the bank to the right of the pool. It was a muddy track but easier to get on than climb up onto the concrete tracks. It would not be easy on skinny racing tyres though. 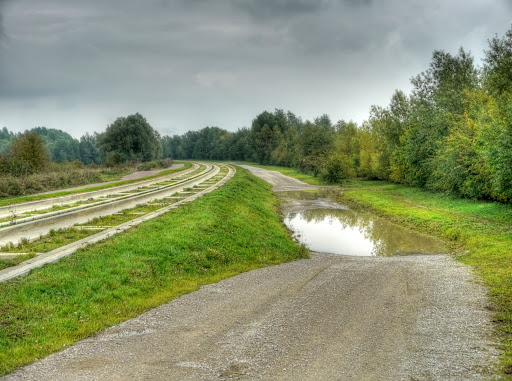 The other areas of the Cycle way that are prone to flooding were muddy but not as bad as the last tow examples. I really do wonder what there is in store for users of this high quality path. Why on earth does no-one seem to know. The rest of the CGB path was ok down to Histon where it is going to get a tarmac surface. Mind you there are stretches of the CGB where rabbits seem to be desperately trying to burrow into the foundations. Perhaps that is why they left the Pillboxes - they will use them as shelters to stalk and shoot the rabbits! (This one is near the Oakington Airfield (as was). 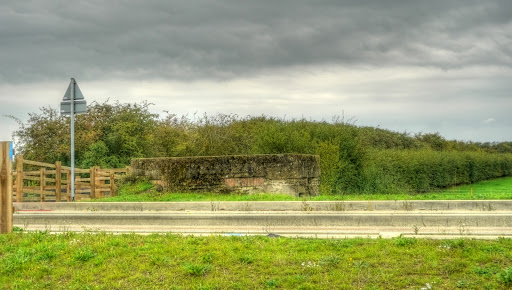 There you have it - no visible progress (to me anyway) but signs that indicate that just maybe one of the 6 faults is going to get fixed. My money is on the Shared-use path getting somehow forgotten and then everyone pleading that there is no budget anymore. Well in my view there shouldn't be a budget for incompetence. A quick read of the CCC report of the 28th September 2010 suggests that the surfacing of the cycleway between Milton Road and Longstanton will have to wait until the CGB is finished as BAM Nuttall won't co-operate with the Council on another Contractor doing the work. The report is also from www.noguidedbus.com they are so much easier and quicker to find there than on the CCC website, have they not learnt how to organise data so that it can be easily found - or is it deliberately obfuscated on the CCC website?