A calming ride before collecting the Squealing Pig

Cars have lost the allure for me that they once had. I still (very much) enjoy watching F1 and this season is certainly an interesting one. But cars are now occupy a more utilitarian aspec in my view. Perhaps as I get older and the insurance gets cheaper it is one of those perverse I don't want what I can have (afford) sort of things. Maybe it is because cars no longer offer freedom - for me motor vehicles are now part of a herd and need to be treated as such and we must focus on the efficiency of the herd. Certainly motor vehicles are not eco-friendly and really are polluting our lives with chemicals, particles and noise. (This month's edition of Cycling plus has a feature on pollution - it is not pleasant reading.) But I also feel let down by my car (and its manufacturers) - for the last 6 months I have been getting an intermittent squealing - which goes away if I touch the brakes.

The least few long trips (York and 2 x Bath ) have been terrible - once the squealing starts it does it at any speed. It has been into the Garage twice - although the first time was for a recall as the power-assistance on the brakes could stop working briefly not long after starting and driving down the road and finding that the brakes have gone hard is not a pleasant experience. So when it went in to have that fixed they asked me anything else? I mentioned the squealing - when I got the car back there was no paperwork to tell me what was fixed. Am I just suspicious, or are the Car Manufacturers deliberately being secretive about their faults? The noise came back. On a Saturday, I took it in and they looked at it on the spot. (I got the car from Marshall's landrover in Cambridge - so pretty good that they did that.) They could not find anything, but did mention it might be the disks that looked a little rusty.

It went in for its three year service on Friday and to have its first MOT. Now they have found a problem - and I need to check whether they made me pay for it or not. They also recommended replacing the rear brake disks as well as the pads. Now call me old-fashioned but I always thought that the pads were supposed to wear out and get replaced - the disks were solid things. It appears not - they told me that it is usual to replace the disks, "they are a wear and tear item". Rest assured it was not a cheap replacement either!

I have the LandRover customer support number and will ring them on Monday. This was my third LandRover and it will most definitely be my last - in my experience the car has just not delivered the reliability I would have expected. It has broken down on the road and had to be recovered a couple of times, I have had suspension failures on the road a couple of times necessitating a very slow speed journey straight to the dealer. It has had brake problems and the fog lights failed because of corrosion as did the suspension the second time around. My wife has a Honda - that is over 10 years old and it has been exemplary. I did read an article that indicated that the Discovery 3 was in the top 10 most unreliable and the Honda in the top 10 most reliable - from my limited sample they were absolutely right. Oh yes - bear in mind that the metal of the brake disks must also be contributing to the pollution - does that mean we are breathing in iron filings? Sorry I needed to get that off my chest.

I dropped it off at the garage in the morning and cycled back and then in the afternoon because it was POET'S Day (Push off early tomorrow's Saturday) cycled off into the Fens and back in time to pick it up in the evening. There is nothing like a bit of exercise to help deal with the stress of car ownership. So despite saying I would give the Lodes Way a rest it happened to be convenient as Marshall's Garage lies on the NCN 51 route out of Cambridge. ( have been referring to the routes as Sustrans 51 -but I believe the official terminology is NCN for National Cycling Route.

I nearly got beheaded on the way into Bottisham - well maybe that is a slight exaggeration - but there are some nasty brambles dangling at face level into the shared use path along Bell Road. I took my Longstaff touring bike as if is quicker to fit into the LandRover. I suppose in the interests of balance that is one of the great things about the Squealing Pig, as the car has become known, for obvious reasons. I tend to go faster on my Touring bike although don't get the idea that I am a fast cyclist.

One of the serendipitous things about Fen roads is they tend to buckle with the shrinkage of the Fens and are a bit like a roller coaster in places. Why is this serendipitous, well when my son was a baby he went through a patch of being bl**dy difficult to get to sleep. A soothing drive along a Fen Road would often do the trick. I have observed that as he went through his teens sleeping was no longer the issue! the other good thing about the bumps and dips is that it tends to slow cars and vans down - which when there is barely enough space for a cyclists to pass a car can be a very good thing indeed.

However there are limits I suppose and this part of Lodes Way (Headlake Drove) also has longitudinal cracks and bumps which can be quite bicycle unfriendly especially at night when you can't see them. It looks as though the road is going to get patched up next week and so Lodes Way will be closed. Normally I tend to take road closures with a pinch of salt when cycling - most times you can get through - although not always. I would imagine that it would be possible to get by on the grass here - you have been warned though. When roadworks are scheduled there is rarely any though given to the effect on cyclists - what is a nuisance detour for cars can be a significant extra chunk of journey for a cyclist. If it is totally closed then heading down to Swaffham Prior and then to Reach looks to be a possible detour and then back up past Tubney Fen. 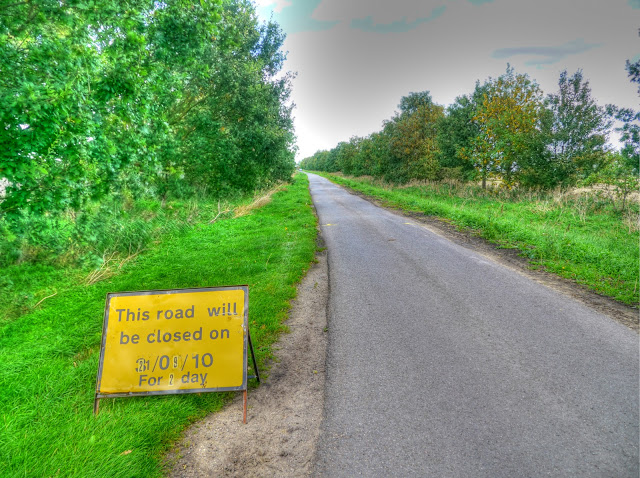 One of the new Information Boards alongside the newly-opened bridge over Reach Lode. 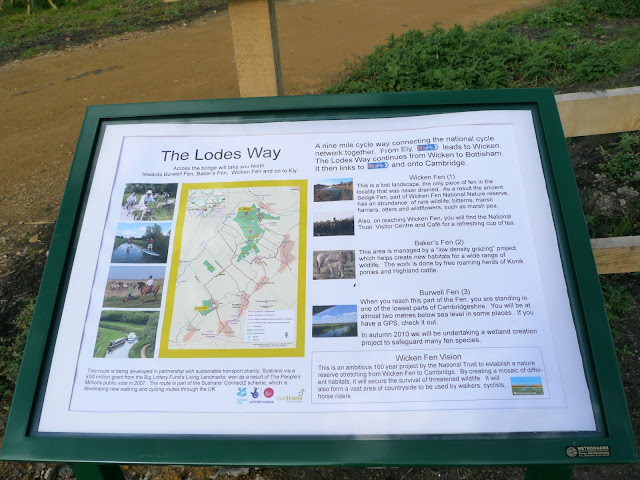 The newly opened bridge, reaching across the Lode, the colour matches the colour of the sky! 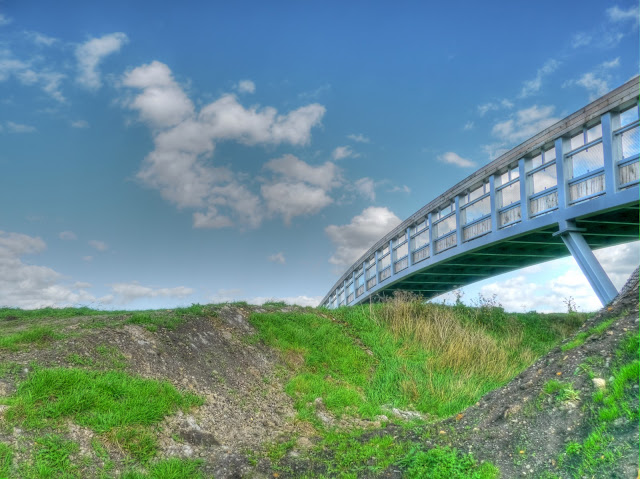 The bridge has some nice metalwork and timber and then extensions to the fencing that look a little more rough and ready. (As I understand it, changes to the Bridge created the requirement for extra fencing and it was an afterthought.) 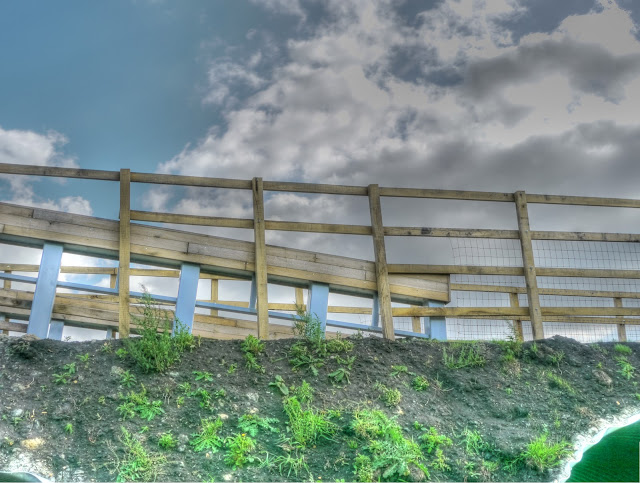 Despite the NCN signs down in Burwell that point along Newnham Drove to Lodes Way there is no easy way through. You have to lift your bike over (or squeeze it through) and then either squeeze through or climb over after it. 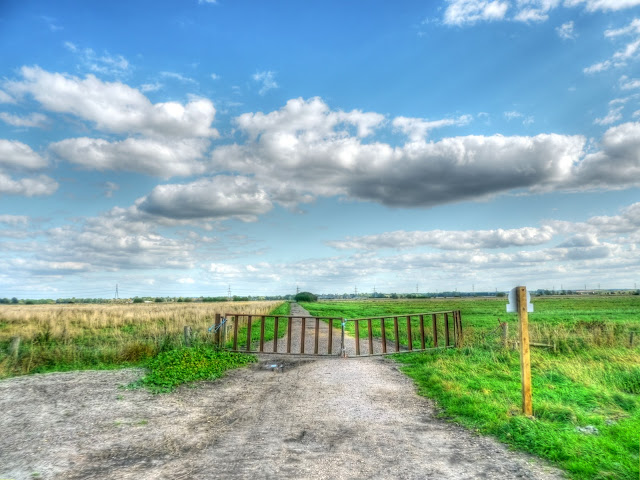 There is no warning about Newnham Drove being closed on the Sustrans website, I suppose because Newnham drove is not actually part of the NCN network. There is a warning about crossing Reach Lode - there is a picture of what the new Bridge might look like at the bottom of the notice. 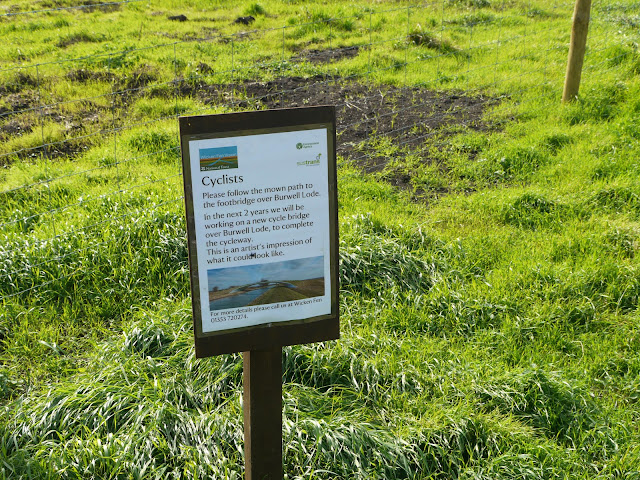 This is the mown path - think roughly mown not cricket pitch standard. I find it easier to carry my bike over the footbridge to the left of the picture rather than wheel it up the ramps. 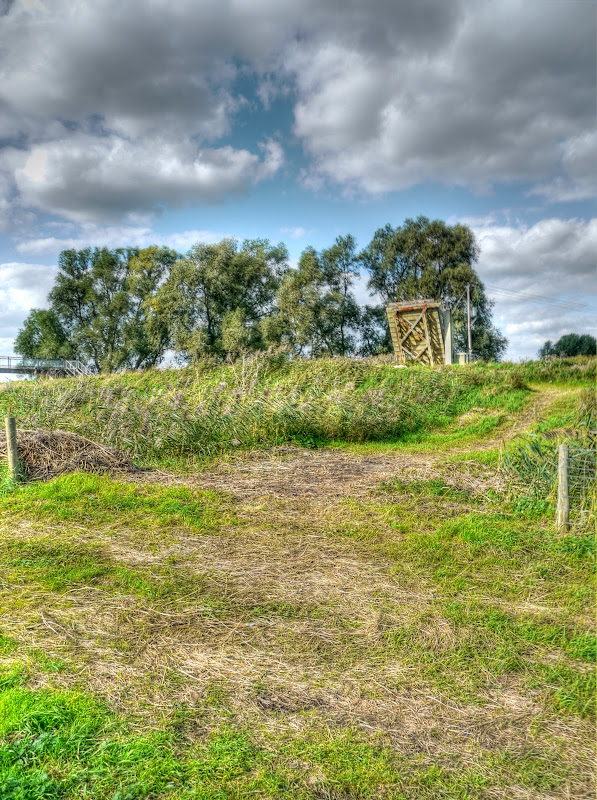 On my way back through Burwell along NCN 51 I noticed a new History Plaque - there are a few in Burwell pointing at snippets of village history. There where Wharfs and Warehouses along North Street (along which NCN 51 runs) in Burwell and boats would navigate the Lodes from the 1400s through to the early 1900s (it says). Normally I would point to a link with more information. However my Internet connection is currently running 100 times slower than normal. After having a few years of very good network connectivity I have had all sorts of problems for the last two weeks as my ISP switches to BT's infrastructure. I am not sure I will actually be able to upload this Post - although when you read it it will have been! 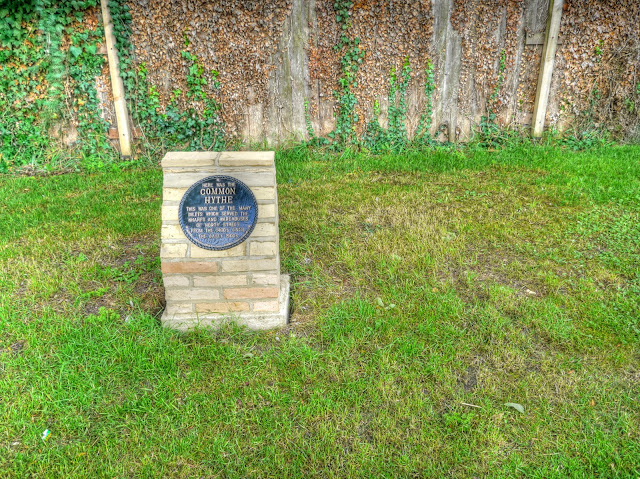 This is the shared path along which NCN51 runs out of Bottisham, it is Bell Road. as you can see there are some wicked brambles hanging across the path. This one could have taken my eye out. (And the lower one my knee!) I think that the standard of upkeep of the paths is based upon the assumption that there is only "traffic" in one direction. Even then this one is dangerous for cyclists coming into Bottisham. I must stick a pair of secaturs in my bag and do some pro-active trimming. 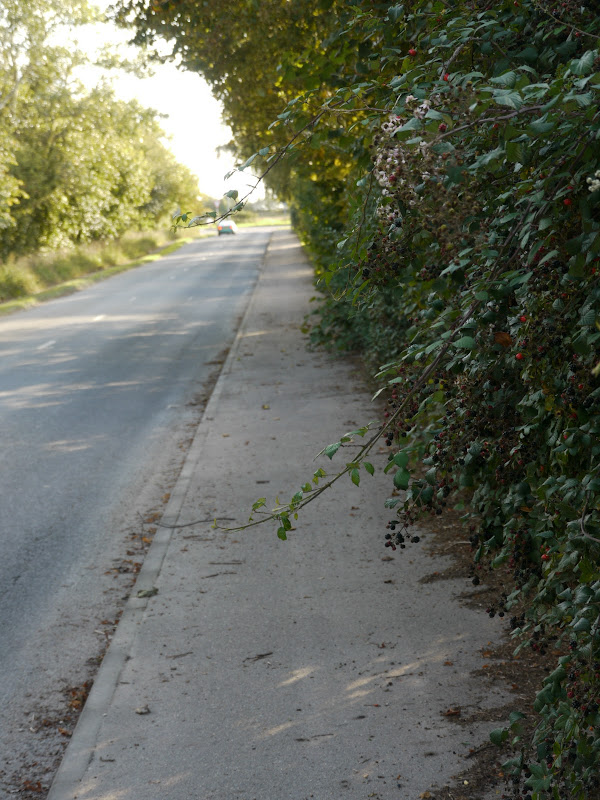 I got to Marshall's LandRover in time to pick up my car and its new bits and pieces and the garage did have an explanation for the "squealing", so time will tell. At least the ride had taken the edge of my annoyance and yes it was a big bill - not that I am looking for sympathy.