There is a saying that problems come in threes, there is also a belief that you wait ages for a bus and then several/three come along at once. Well the second saying has a rational explanation. Check the explanation, but basically if the first bus gets delayed it picks up more passengers than the following bus, which means whenever it passes a bus stop more passengers accumulate and because the interval between the buses reduces they pick up fewer passengers than expected. This delays even further the lead and allows the second and subsequent buses to catch up. Now that explanation does not work for problems, I don't know about your, but mine don't pick up passengers. Although they do waste time and I suppose could make you more prone to accidents because of inattention of lack of time!

So what has been happening, well my Internet Service Provider (ISP) decided not to be a Local Loop Unbundler offering uncapped 24Mbps Internet after some hardware problems they presumably felt was not economic to fix. This meant no connection over the Bank Holiday weekend. They switched me to a service that basically runs over BT equipment, which has a maximum speed of 8Mbps. This affects me in two ways, the first is it takes a lot longer to upload pictures for my Posts onto Picasaweb. (20 pictures at 5Mb is around 100Mb so quite large.) Now this is not too bad, but they you notice it. Having been cut back my kids who now seem to watch a lot of their TV via BBC iPlayer (and the others for the other TV channels) find that the slower speed connection struggle to support iPlayer HD. According to the BBC they use 3.2Mbps for HD.

You might think that should be ok, but whilst the headline speed is 8Mbps even for those of us living close to their Telephone Exchanges I only get around 6.4-6.8Mbs so even one HD TV stream with up to three other Internet users becomes a bit choppy - not what you want when watching TV. Also since being switched to 8Mbps my line has been bouncing up and down more often than a bouncing thing - bouncing. I had assumed that this was due to all the reconfiguration work - now I am not so sure.

At the weekend my broadband line suddenly throttled down to 50-60Kbps which is over 100 times slower than it should be. My ISP does not offer support over the weekend so it was not until Monday that the dialogue began. I tried various tests, but they seemed a bit random then I got an email this morning telling me that I had exceeded my "cap" and been throttled back. So I have been forced onto a lower performance connections with a cap and although I pay less per month to get back the download cap I am now having to pay more. I am not sure whether their cap started on the 8th September, the official date of the switchover of the service or the 4th when they switched without telling me. So credit card in hard I have bought some more limit and am now looking at alternate suppliers. One gripe I have is that many of the comparison sites indicate speeds that look high (upto 20Mbps or 24Mbps) but only when you run the particular ISP do you get told it will only serve upto 8Mbps. I even looked at getting a leased line - 100Mbps 24/7 up time, no contention - but far too expensive to justify for a home-user.

I have also registered interest with BT for their Infinity product with speeds upto 40Mb, but I cannot even get a prediction as to when they will upgrade my exchange. It feels like pre-broadband times when BT seemed to enable exchanges at a snails pace. I guess I just don't believe that allowing Billing companies in top of infrastructure really drives a competitive offering. It perhaps trims prices but does not seem to drive investment in better infrastructure.

I have already commented on my Car problems. On Saturday after returning from a trip around the Fens on my bike my wife had discovered a leak. Still we are covered by British Gas for such eventualities. However when they turned up on Monday they pointed out they the agreement did not cover shower pumps. Fortunately we had a number for a local plumber who sent someone round within an hour and who fixed it similarly quickly. Now we just have to let the airing cupboard (which is where the leak was) well, air.

Come Sunday a mild lurgy hit me - not bad but enough to put me off cycling in the gloomy weather. Then on Monday my wife got the lurgy, but quite a bit worse.

The good news - I did cut the lawn and despite the recent growth it was not too soggy and cutting it was quite straightforward and it looks good. So here we are on a Tuesday I have an Internet connection and trimmed lawn, my wife is feeling better (more or less) and the weather looks delightful. I am definitely going to take the afternoon off.

Surprisingly there have been no items on the Cambridge Guided Busway (CGB) in the press, which I have been struggling to peruse at snail-speed broadband. But good to see our Trainee Police Officers are keen: "Trainee officers out stop-search total up". Other roadworks in Cambridge are now occupying the "CGB" slot - "'Hurry up'" call over road improvements" - some of which are cycle-friendly. There appears to be the usual political tit-for-tat-ing. There are the infamous words that "The scheme is on schedule as we programmed and I am glad to say that it may well be finished earlier than planned."

This picture was taken in April 2009 when trail runs were held on the CGB for local residents - and true to the word of the poster on the side of the bus I was on the busway soon - with 30minutes I think. Indeed I have been on the busway quite a few times since - although not on buses - for as we all know the Busway is late - perhaps three will come along soon! 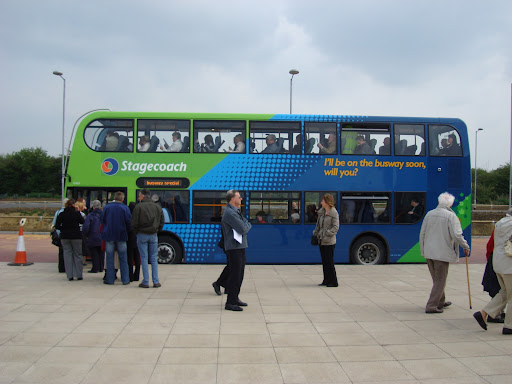 These are the guide-wheels that keep the buses on the straight and narrow (CGB) - perhaps they could have fitted them with brushes and swept the streets with them. 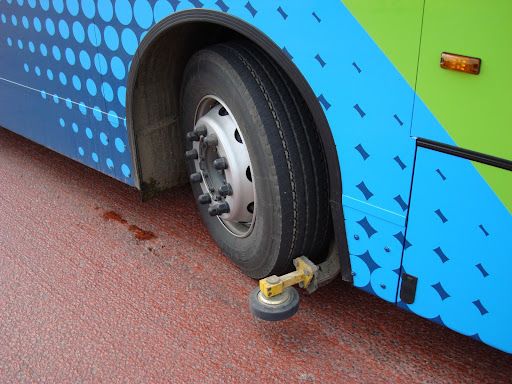 And finally "Common sense is needed with cattle" which suggests that cycling is one of the safest ways to get past cows as they are not naturally fast.