Last chance to cycle the Lodes Way before it opens!

September 11: Tomorrow (which is actually today) is the opening of the Lodes Way and for some strange reason I decided to pop round Lodes Way again this afternoon. I have to say it is nice to have a different cycle route to hand and it provides a nice distance to cycle and there are a few variations on the route to take just to stop it getting to samey. Since I have blogged about the route for the last few Posts I will keep this one short. I won't bother showing a map - you can check out the last two posts. I went out on High Ditch Road and along Low Fen Drove Way and then into Horningsea and out along the Harcamlow Way to Lode and then took the Lodes Way to Wicken Fen with a slight detour on the way back into Burwell and then back onto the Lodes Way via Newnham Drove (that bumpy old road). The for a change I went back via Lode.

As you can see the weather was remarkably pleasant - warm and sunny with blue skies. The drain covers on the bridge over the A14 on Low Fen Drove Way are still missing. when out in the car - something I try to avoid too much of, I drove over a bridge with missing drain covers - I was going to stop and take a picture but my wife stopped me! 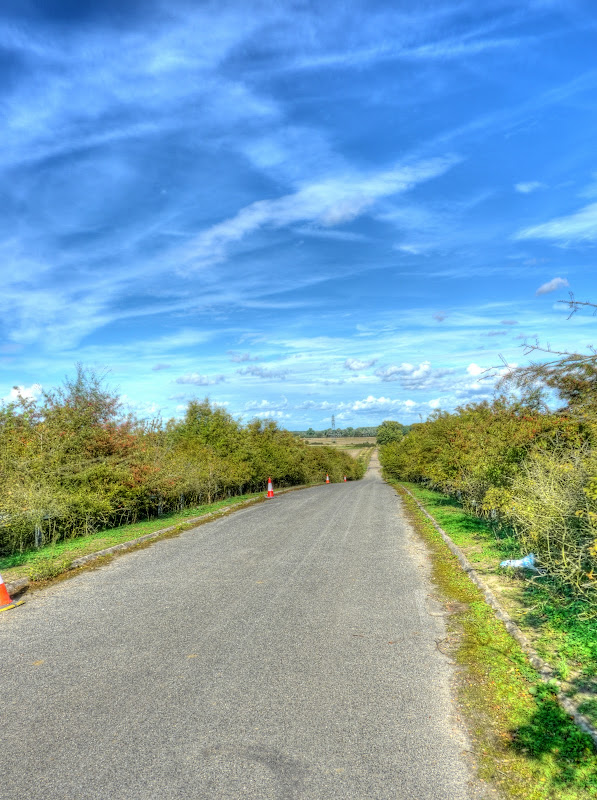 The apples are now falling of the trees - not a bad crop here near Snout Corner - fruity smells in the air again. 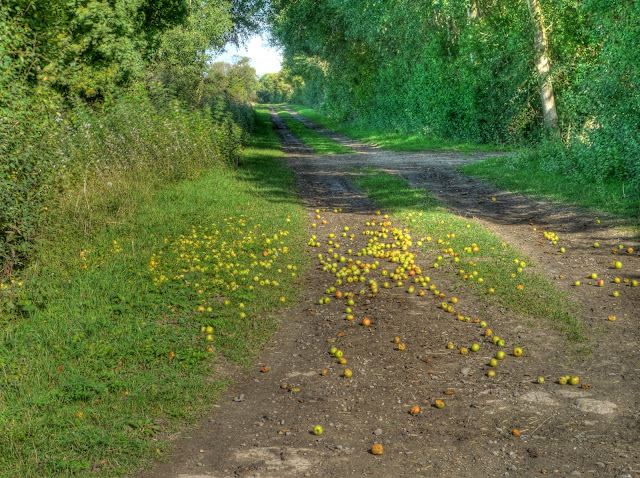 I am not quite sure why I took this picture I think it was because I thought the sign had not been there the day before - but am not sure. There seems to be a push on to get as much of the Lodes Way finished before the Official Opening on Sunday. One thing I have noticed is how despite being in the countryside there are loads of pylons and telegraph poles and cables all around. 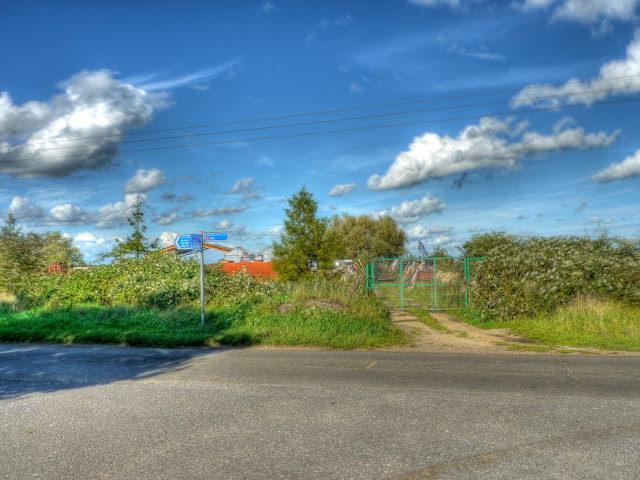 The bridge was still fenced off - although I passed 4 people out on their bikes also heading to the bridge - they had been told that the Lodes Way was now open. I showed them how to move the temporary fence a little bit and that way we were all able to carry on. As I was heading through Burwell Fen along the new track I saw three deer grazing on Hundred Acres between me and Burwell Fen Farm (the tin huts in the background). Normally out here the deer will scraper - but these seemed to be happy to stay - but kept a wary eye on me. 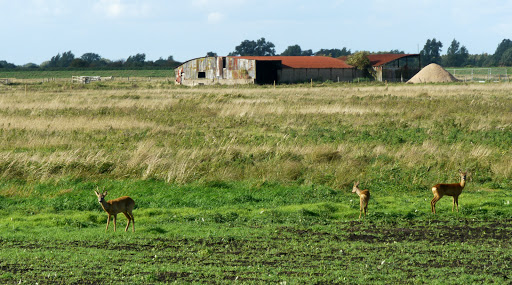 My habit has become one of cycling along Lodes Way and then around Wicken Fen and then down into Burwell and back onto Lodes Way via Newnham Drove. I had to stop and take a picture from the old bridge over Reach Lode looking back on the new path and a blue sky dotted with white puffy clouds. 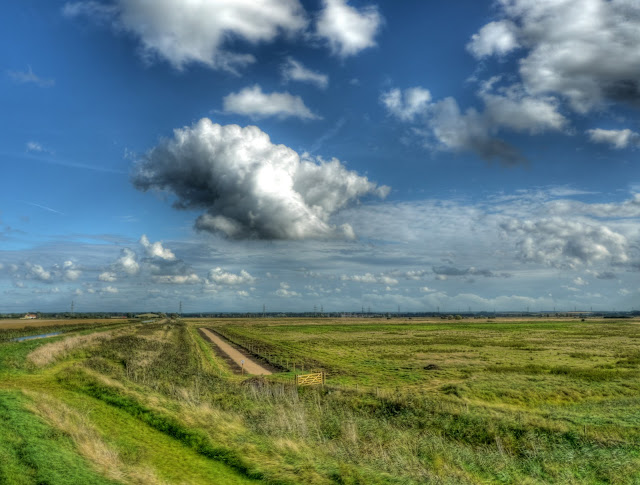 On the way back (Wicken Village is the furthest point of the ride) I did indeed pass through Burwell and then turned off Sustrans 51 (Weirs Drove) along Newnham Drove - one long straight drove - I've mentioned the parlous state of the road before so I won't go on about it again. This time I'll focus on the good stuff - as you can see although, not unusually for a country lane it is only wide enough for one motor vehicle - but there are convenient passing places (er one actually if I remember correctly - I could be wrong though there might be more). 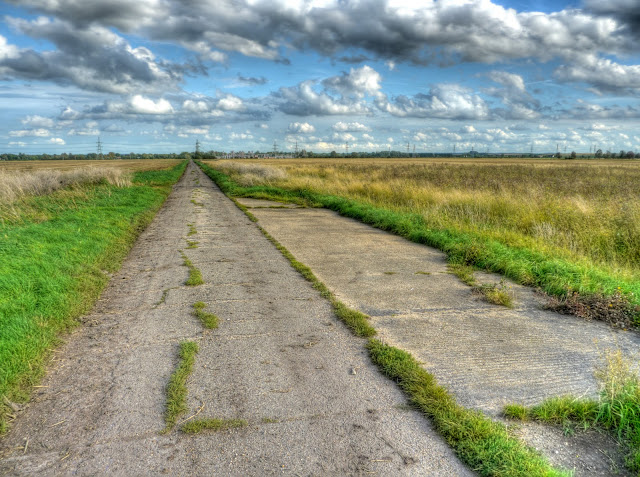 On the way back through the Burwell Fen on the new Lodes Way I stopped and sat on one of the new benches and had a drink and took a sequence of six (x7) pictures which I then stitched together using Photoshop Elements - to give you an idea of just how wide and open the skies are here in the Fens. This will be a great ride in the dark and when there is snow on the ground.

The bridge has been built with three culverts on each side to allow the passage of flood water and animals and I thought vehicles as well - well on the Burwell side there are concrete blocks in the culverts so perhaps cars aren't supposed to use this side. It makes a convenient place to shelter from the rain though. 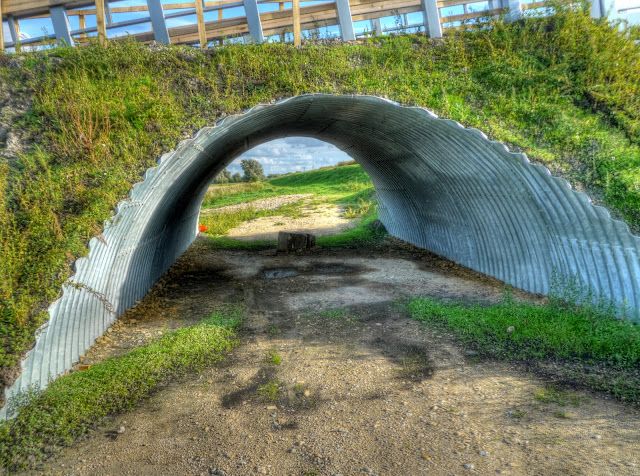 On my way back through Lode I noticed that the village hall was up for sale. Well I was wrong it was not a village hall at all it was built in memory of one of the family that owned Anglesey Abbey. The stone above the door says "This Hall was erected in memory of Urban Hanlon Broughton by his Sons MCMXXX" Which means the hall is not as old as I thought it was either - 1930. It would also appear that the hall was not actually gifted to the village either.If you want to buy it here is the link. The guide price is £600,000 and there is planning permission to convert it into 3 four bedroom terraced houses. (It was used as a school though.) 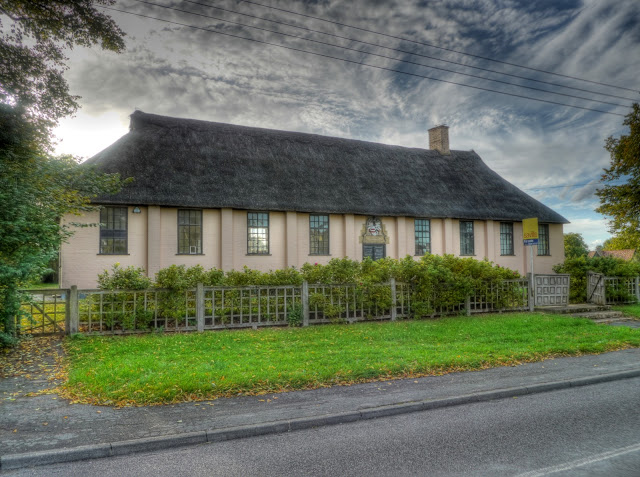 I have decided I shall go along to the Lodes Way opening tomorrow - to show my support for an excellent project that have already got a lot of pleasure from. So what I will have to do is make sure I have the F1 Monza Grand Prix scheduled to record and then avoid any possibility of hearing the result (or anything). I find it easy to watch a Grand Prix whilst it is happening - but if I know the result then it I struggle to find the enthusiasm to watch.