I know I said I was going to go out cycling yesterday afternoon, but plans sometimes have to change. In my case along with a friend it was time to research the Internet options available, see yesterday's Post for the detail - but I now have some Internet challenges. Fortunately I am no longer throttled back to 50Kbps, which is what happens when you exceed your "cap". However having transitioned from 24Mbps to 8Mbps running over BT hardware I have also discovered what it means to have contention. When domestic Internet connections are put in, we get told we get upto 8Mbps, say. However there are physical limitations and this number is the most optimistic number. I live next door to a BT exchange and the maximum rate quoted by various checkers is around 7.2Mps - so a bit of a drop already. A BT speed-test of the line indicates that the ID profile is 7Mbps. Which to me implies that the rate at the "exchange" has been set for is even less.

Mind you these lines have training periods over which the speed is adjusted to cope with any physical issues and to get the "optimum" results. So it could go up or down! Anyway I am already suffering a 12.5% drop from the headline number. The real issue though is called "contention", where essentially a number of people end up sharing the same bandwidth. Now if you are all looking at the occasional web page or email who minds. The trouble is that what the "Contention" means is that 20 or 50 people may all be sharing that bandwidth. I have had a look but I cannot actually find out what contention I am getting from my ISP, well from their website anyway. Apparently 50:1 is common for residential packages. So the worst case is that if everyone is using the Internet at the same time the bandwidth drops by a factor of 50. So my 7Mbps can drop to 70Kbps (or 0.07Mps).

Now of course this can't happen that often surely! Well actually with the advent of things like YouTube and BBC iPlayer it is now more common for people to want to watch TV programs on the Internet. As well as watching on Computers various of my family also use a Nintendo Wii and an iPhone to watch TV via the ubiquitous iPlayer. And these programs can go on for 30mins or 60mins requiring a constant 1.5Mps or 0.8Mps (according to their webpage) and I believe that HD requires 3.2Mbps. So at that implies that a maximum of 10 TV streams (8Mbs/0.8Mbps) of low resolution TV programs can be watched by you and your neighbours on your shared bandwidth. This is of course not that difficult to - imagine - we can easily have three different TV programs being watched on the web in the house at the same time - well if the bandwidth was there!

But surely this does not really happen does it - well last night I was getting between 0.3 and 0.5Mbps at around 8pm so something was (not) happening. The Gadget show is running a campaign to get more accurate advertising of the speeds that might be achievable. It does make me feel that the UK is still in the last Century when it comes to the Digital Infrastructure.

To cap it all there are people who live too far away from an exchange, or have aluminium wires connecting their telephone lines rather than copper - which really does nobble their bandwidth. There are also others who blame the BBC for having the temerity to try to keep their customers happy by allowing their TV programmes to be watched over the Internet.

Enough of that, although the problems mentioned yesterday are still being added to. My Son had a letter go astray which was to the Agency organising his flat for his final year at University. Fortunately we were able to scan the documents and Email them - but but adds to the stress levels. Then my wife had someone reverse into her car and break the number plate. He then drove off after saying it was just a number plate - what a git! Nowadays the Bureaucrats require 37 pieces of Identification before you can get a new numberplate (here in the UK) and of course it costs money!

Yesterday I mentioned that the Cambridge Guided Busway (CGB) had not been mentioned in the Press recently - but later that day - "Independent review of guide busway announced". It will be interesting to find out what went wrong, were these the "best laid plans". At a simplistic level the plans can't have been good ones if the project slipped by two years. Apparently the latest problem centres on lighting on the Trumpington cutting where one way track has been used as the cutting is too thin for two-way running. According to the Cambridge County Council website on the Busway (as of 10th September) a total of over £7million has been deducted for late delivery of the project, at a rate of almost £14,000 per day.

This problem seems to be set to run for a while, unlike the buses. 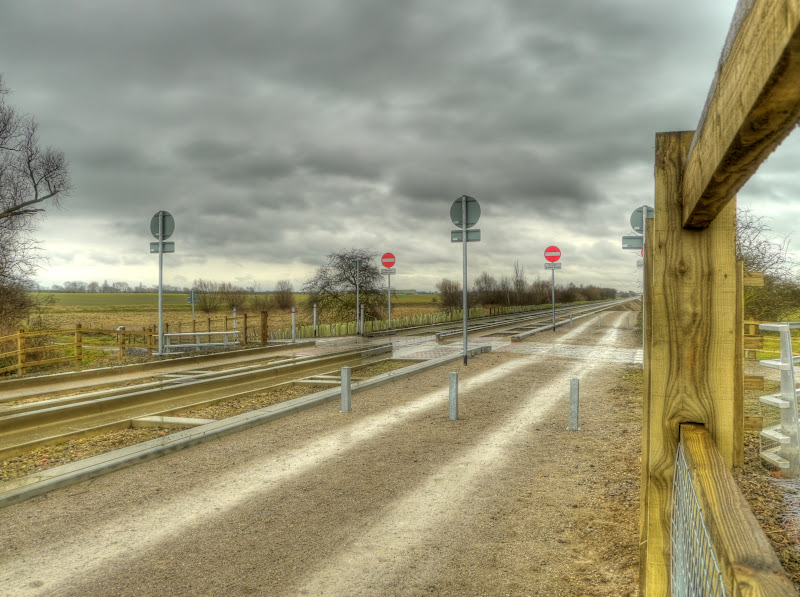 And finally the Depart for Transport has published Cycling, Safety and Sharing the Road: Qualitative Research with Cyclists and Other Road Users. Which seems to have a lot of jargon e.g. "Cycling is not a single homogeneous activity" and "there was a strong tendency for cyclists to conceptualise serious accidents as collisions between a cyclist and another vehicle." Unfortunately there was no quantitative analysis so it made simple presumptions such as wearing helmets is good and that wearing bright clothing is good - but never tested whether this was true of not. I was wearing a fluorescent yellow jacket and hat when a car ran into me - he didn't seem me. So Whilst it is tempting to suggest that wearing bright clothing is bound to help a failure to back this up with data indicating whether it helps and why it helps mean that, for me, the report was a lot of opinion and talk.