September 1: Whilst writing another Post I realised that I had left this Post out of the sequence and so there might be some complications as I try to sort out the Post dates. I will stick a date on this one and maybe try to delay the other Posts so they end up in the correct sequence on the Blog. If it all ends up in the sequence they happened, then the next Post will complain about my ISP Internet Service Provier). Well - uploading the pictures in this Blog took 45 minutes and the connection got interrupted at the end. Fortunately the upload re-started at picture 22/23 rather than at the beginning!

After a lazy August it was time to do a bit more cycling again (the old power to weight problem is rearing its ugly head). So what better way than to get in a few kilometres (miles) at the start of a new month. Mind you I do wonder where the time goes - it is amazing just how quickly the weeks and months pass by.

The idea for riding this route came from reading the CTC Cambridge cycle ride blog to Mildenhall featuring the new Lodes Way route - not yet quite officially open but almost - so worth a look. To add to the rural nature of the route rather than head along Sustrans 51 I went via Low Fen Droveway and the Harcamlow Way. The distance covered was just under 60Km with less than 100m/ of ascent/descent starting at 10m above sea level and getting down to 0m with a maximum peak of 19m - so a ride with variations at a maximum of +/- 10m - flatland cycling at its best!

Here is the BikeRouterToaster link to the map. 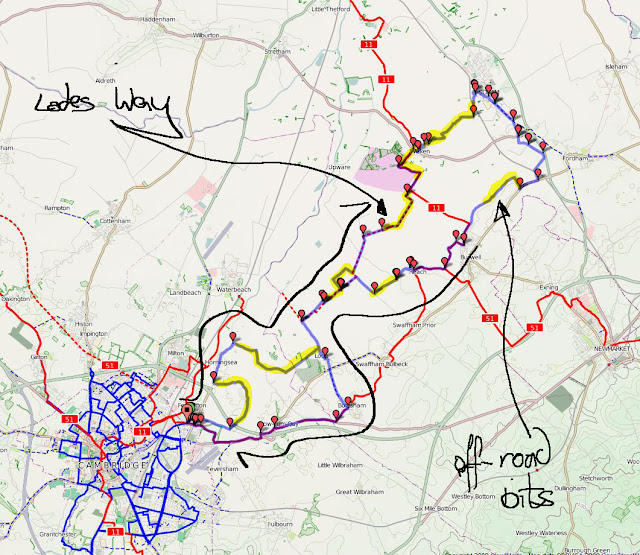 The Bridge over the A14 - "No Tipping" allowed. 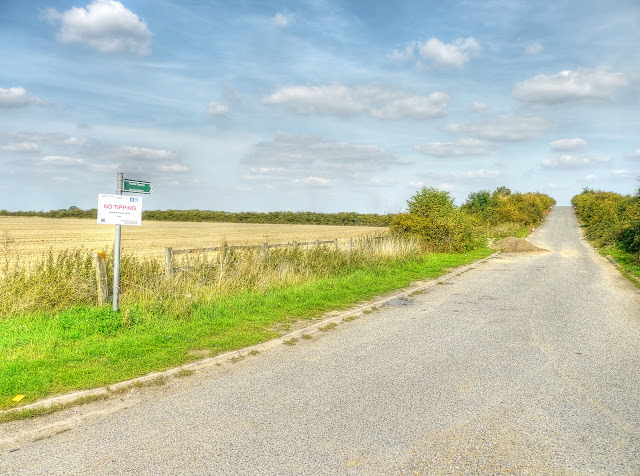 So this must be a new rest stop, it can't be rubbish - only 10m from the sign. Another No Tipping sign has disobeyed itself and is tipping quite badly to the left of the picture. 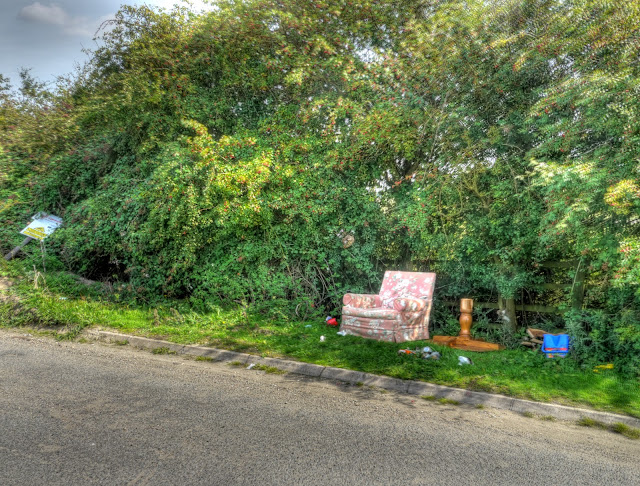 I saw loads of Combine Harvesters around during my ride, I started taking pictures of them, but don't worry I stopped taking them after a while - they all look pretty similar really. This was taken from the other side of the Bridge. 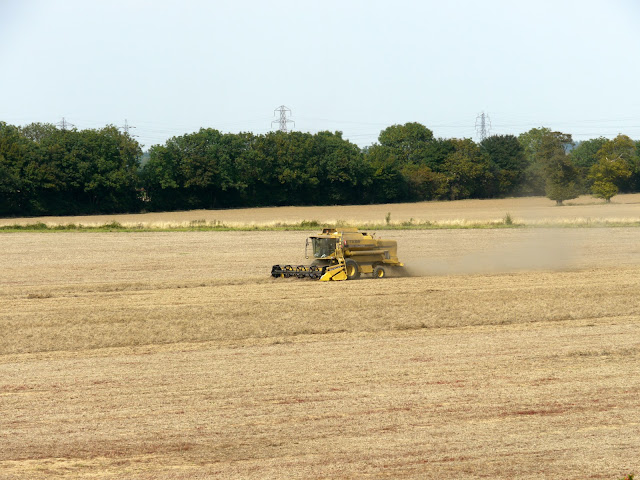 After the dizzy heights of the bridge I returned to ground level, fortunately not suffering too much altitude sickness. The tosser who tipped this rubbish was not as brazen as the tipper on the other side and tried to hide it a little! This looked as if it came from a shop-refit. 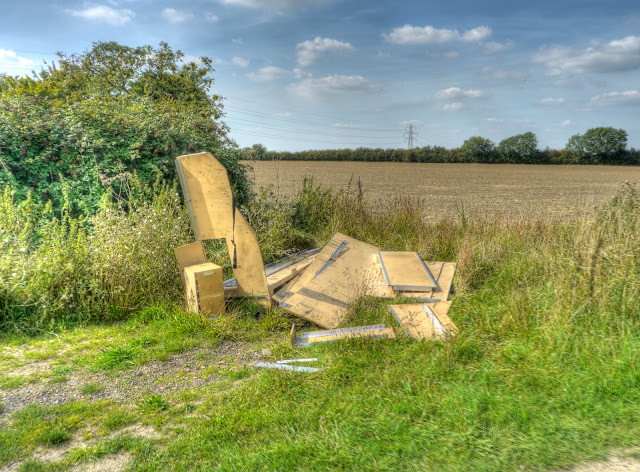 I might have not taken too many pictures of Combine Harvesters - always time for a disk harrow picture though. 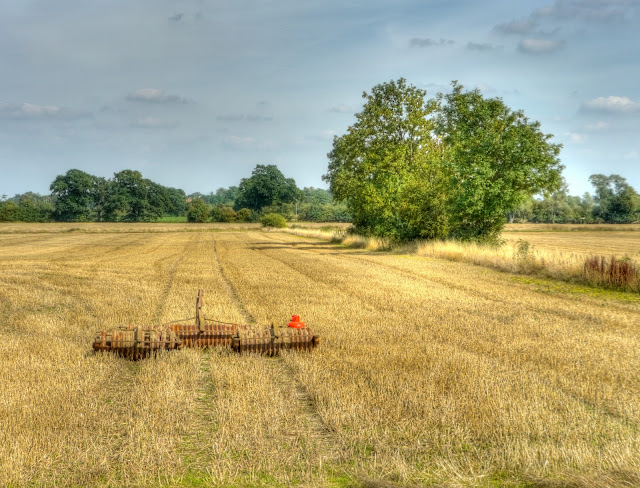 After a brief cycle along the Horningsea Road it was time for another bridleway - the signage really is pretty good around the Cambridgeshire area - this one makes it clear that it is available for walkers, cyclists and horse-riders, but more usefully it also gives some places and their distances. (Quy Fen 1, Lode 2.25, Quy 2.5 - all miles, I have converted to decimal because fractions take time to enter into the Post.) Whilst some may think that visitors should not be encouraged to crowd out the countryside this, in my view, can only be good as it encourages low-impact visitors. (Perhaps they should also have a "Sod off fly-tippers sign as well. It was a delightful day to cycle, pleasantly warm, not windy and blue skies. 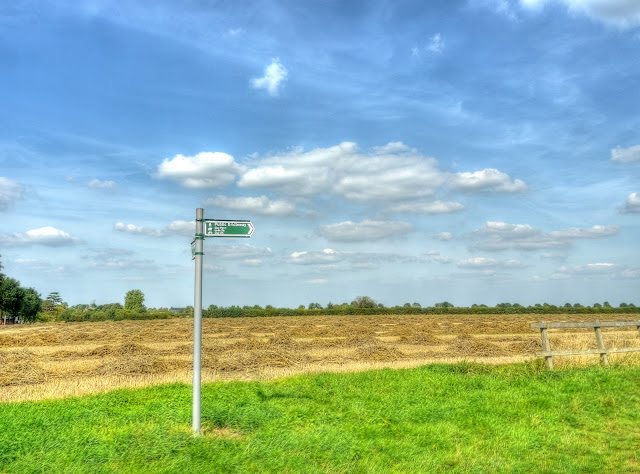 After White Fen I took a slight detour along a byway alongside Swaffham Bulbeck Lode - we have had some recent strong winds and there were a few branches down - this was one of the larger ones. 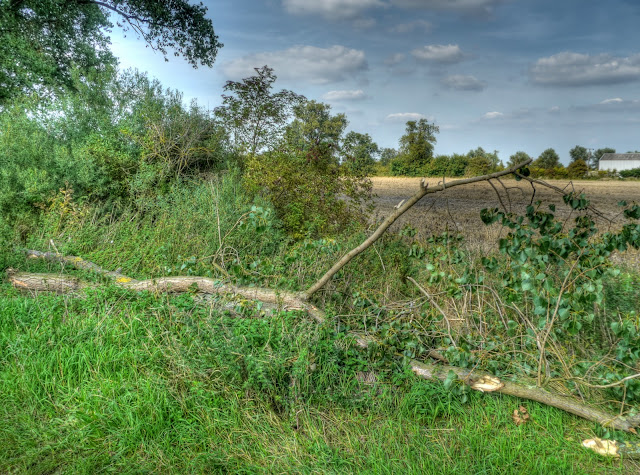 Then I returned to Headlake Drove ( a road) and the route of the Lodes Way. Here is the new Reach Lode Bridge - the gate into the field has now been left open and there is a small gap in the fence across the bridge entrance - implying proceed at your own risk? 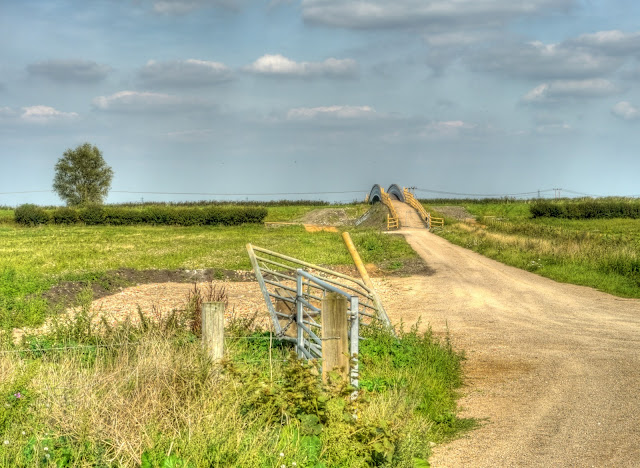 The fencing alongside the sides of the bridge is rough-cut. I do not know whether this will get treated with a wood-preservative or not - it looks just a little raw. 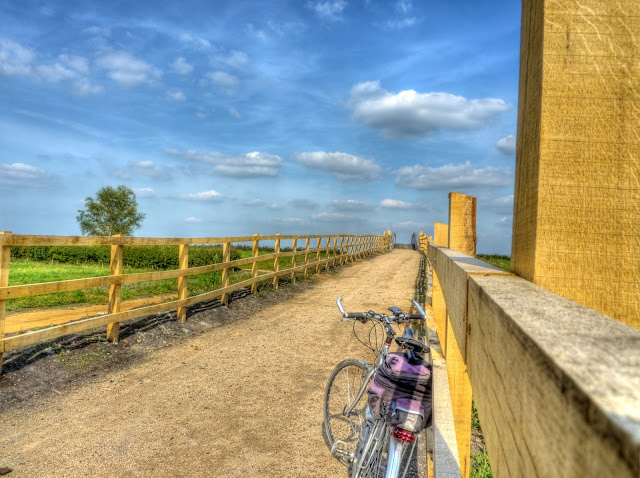 The view from the bridge looking North along Reach Lode. 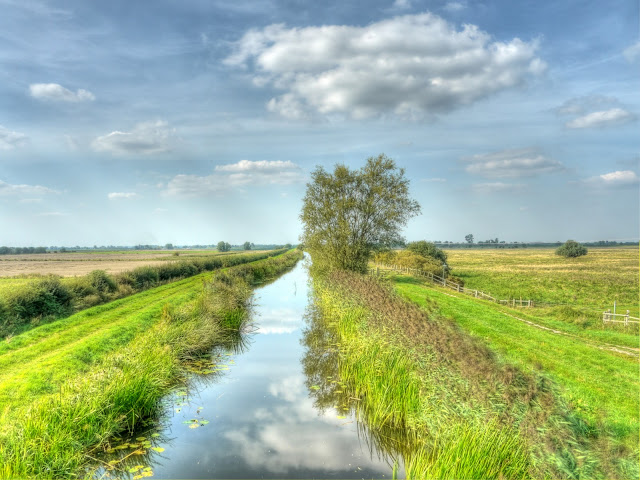 The view looking South along Reach Lode (from the bridge). 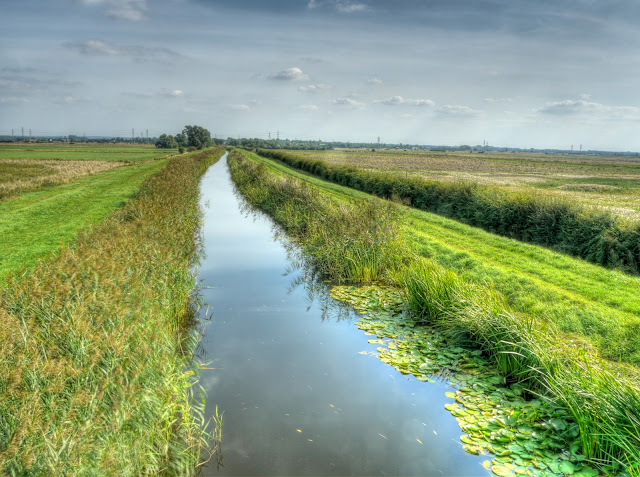 A new path has been laid from the Reach Lode bridge all the way to CockUp bridge (well nearly it is a work in progress). This view looks back towards Reach Lode Bridge. Benches and cycling stands have been provided along the path. This is better than I had expected to see. I had assumed that the track would be a more rough and ready track connecting bits of existing pathways. This is pretty wide, a good surface and through some pleasant countryside. My only caution to cyclists would be that decent tyres would probably help reduce the risk of punctures. This looks to be similar to the surface over White Fen and I have had a few punctures there on skinny racing tyres.

In fact it reminded me of a cycle ride in Holland. When my wife and I got married, for our honeymoon, we took our bikes and a tent stuck them in the my old car and went to Holland. In those days it was the norm to honeymoon (live) within your means which is what we did. It was a wonderful place to cycle and we visited three different areas (and my car did not break down.) We cycled quite a few miles (or should that be kilometres?) as well. Anyway back to the point - we visited a museum somewhere (near Arnhem) and the Lodes Way reminded me of the route - away from cars through, well flat, countryside. 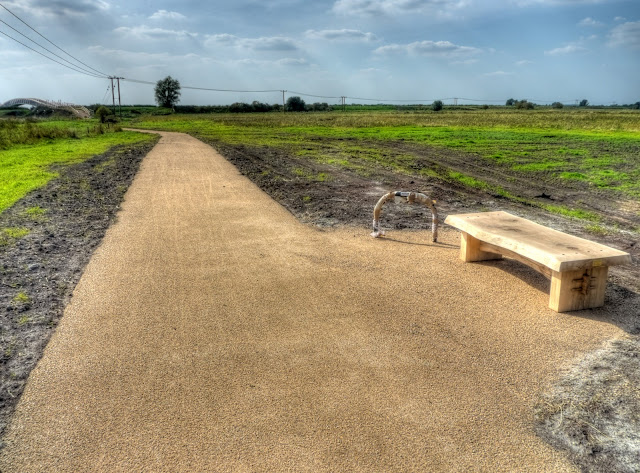 Enough nostalgia, here is the path looking towards Wicken Fen. Lots of wide open, flat countryside. There has clearly been quite a bit of work to build this path. Once again I have to say I am impressed and well done to those with the vision and perseverance to persist. The route also passes two "roads" roads to Burwell Hightown Drove and Newnham Drove so there should be some safe places for cycling with youngsters. 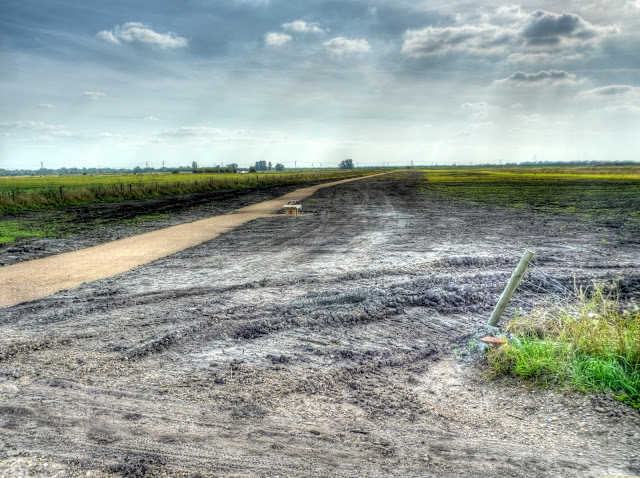 Don't worry this is the last Combine Harvester picture. If you look closely you can see three horses in the field in front. 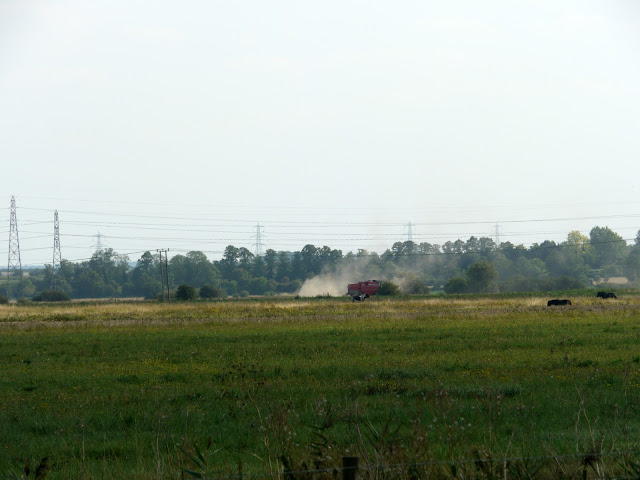 As I mentioned this is a work in progress, presumably they are racing to get it completed for the 12th September Opening. It looks as if some drainage has also been necessary and I presume some fencing will also be installed, a cattle grid on its own is not going to stop cattle eh. (I listen to the radio via the Internet - radio 1 and the BBC website has been briefly unavailable - so I am not the only one having Internet problems - I know a bit of a random aside.) 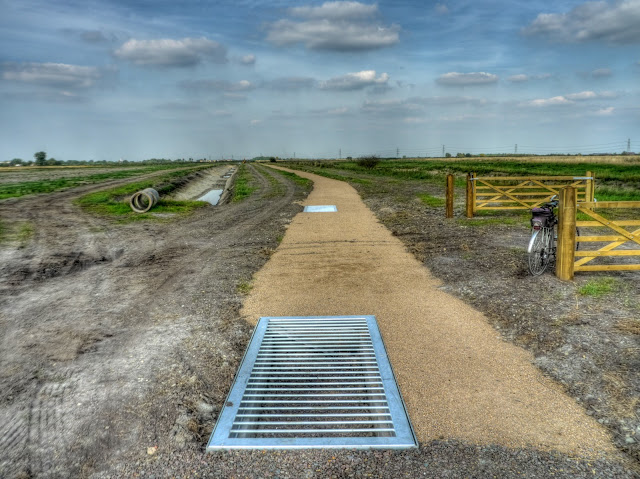 The end of the route - this was taken just next to Burwell Lode. You can see the digger where work was taking place as I cycled by. 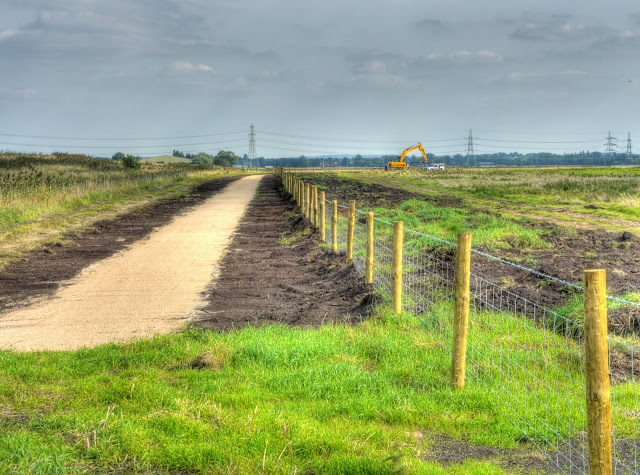 At the moment there is no easy way to get from the path to the bridge over Burwell Lode. I headed through a field hoping to get to a path, but I had not realised there was a ditch in the way. As I struggled through I realised it was slightly foolish to be walking through a field, with quite a few stingles, in sandals - I picked up a few stings on my legs and toes. 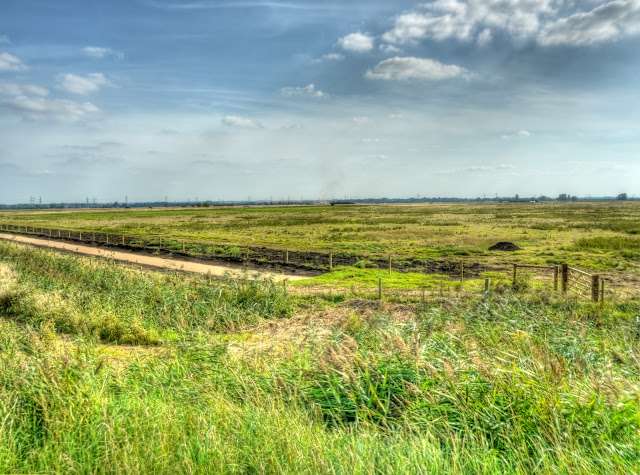 A passing cyclist on the bank of Burwell Lode shouted down to me to warn me. In the end I had to head back through the stingle field and then lift my bike over a wire fence (topped with a strand of barbed wire) and then clamber over it myself. As a kid I did a lot of clambering over barbed wire fences - nowadays I don't feel quite so keen to do it - something to do with barbed wire in the "saddle area". Hopefully they will do something here soon to sort the final metre as it is a really pleasant route to take. For the time being you have to carry your bike over the footbridge across Burwell Lode. There are ramps to guide the wheels - it is pretty steep though. I am not complaining - it is a practical solution and I'd much rather have the route open than wait for huge amounts of money to be found to build a new bridge.

There is an electrically operated bridge nearby but apparently Elf & Safety means it cannot be available for operation by the general public. Ours is not to reason why! 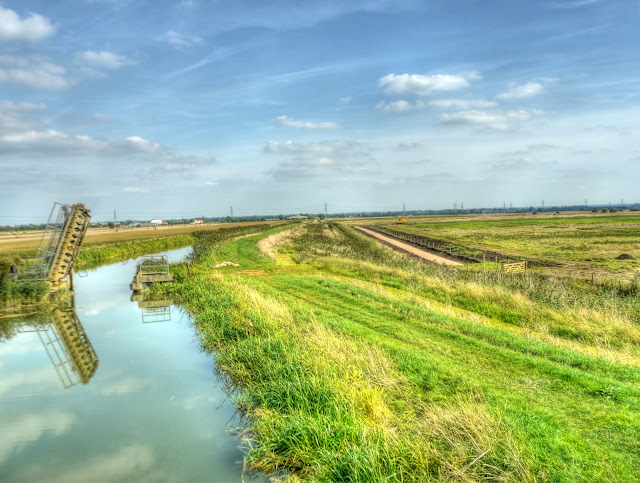 After, what for me is the opposite to my usual direction to cycle through Wicken Fen I reached the "entrance". It appears that they have nearly finished fixing the dodgy bit of track near to the Visitor Centre. Apparently the surface needs time to settle before it can be available for use. I wonder if this is also deadline driven - deadlines are wonderful things - providing they are achievable! 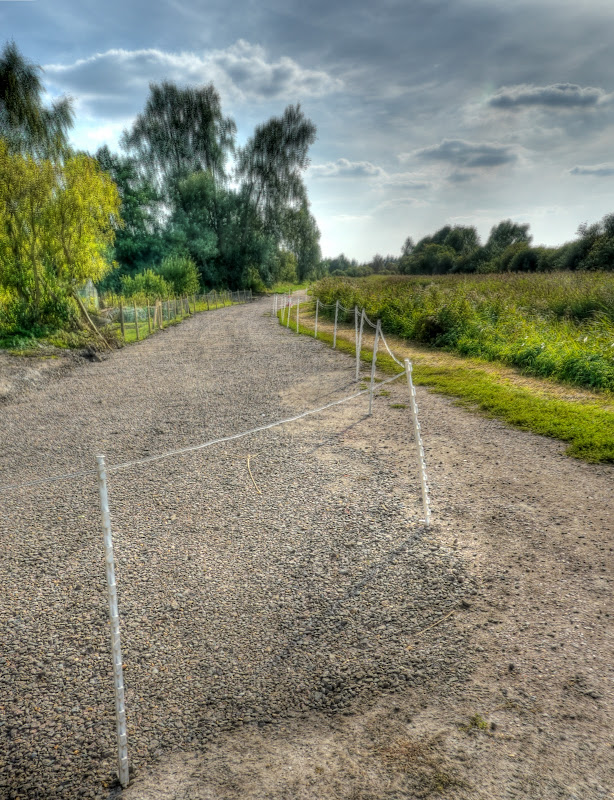 I then cycled along Drove Lane and Brack's Drove from Wicken to Soham - the hedgerows are looking very fruitful. 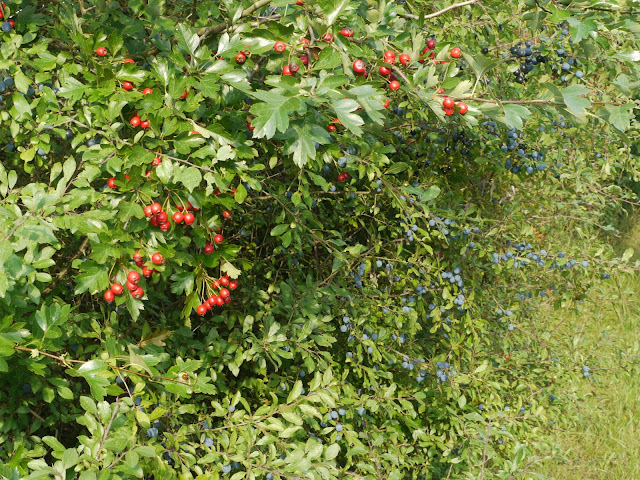 These are Sloes - Prunus Spinosa - infamous for making sloe gin. I don't drink gin and can't recall ever having drunk sloe gin (that's what comes of getting old - you lose you memory!), apparently the fruit is tart and astringent. 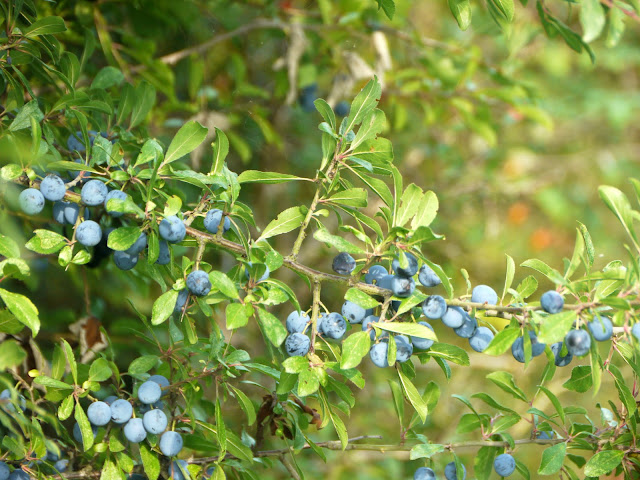 These are the fruit of the Hawthorn they are called "haws" and can be used to make jellies and jams. 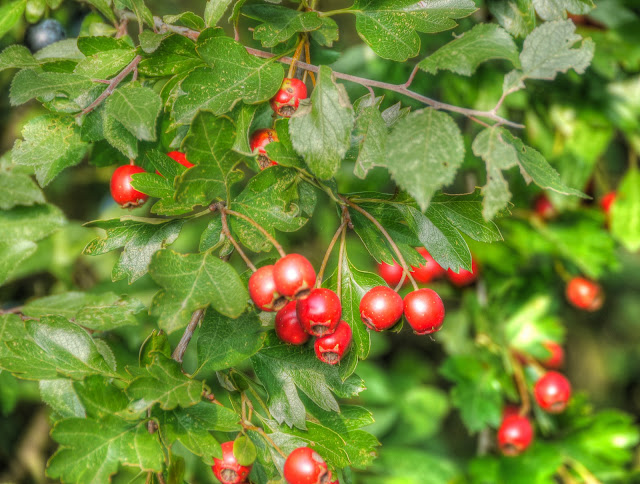 And finally blackberries, I am starting to see people out picking blackberries - although it is slightly early. In fact I have passed a few blackberriers on bicycles. That is they use their bicycles to get to the blackberries, not to pick them. 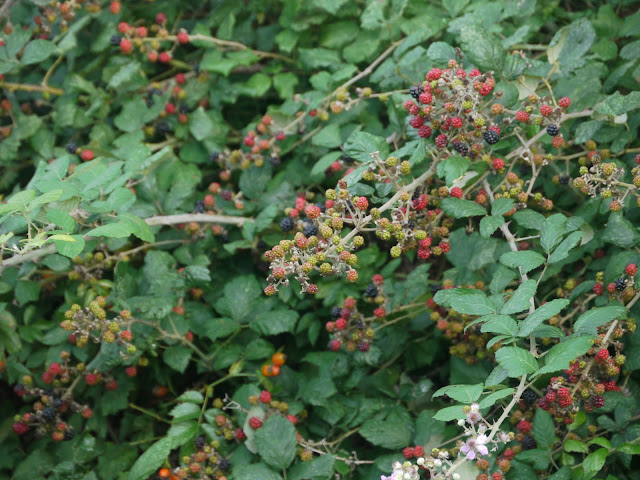 All in all I think the addition of the Lodes Way as a Wicken Fen cycle route is great - hopefully it will attract more people to cycle and enjoy the countryside. Having said that I also saw a few cars out out on the byways again - perhaps they were blackberrying as well. There were also around 20+ Combine Harvesters - you can see why I did not take any more pictures of them.
Posted by Jme at 9:00 AM