There has been a blitz on burglars and bike thieves with Police now holding over 150 bikes (and other things; computer, laptops and the like). They will hold an open day for anyone who has had property stolen during the last year to return stuff to their owners. (Although you won't be able to walk away with it on the day). Apparently they have charged more than 50 people with 192 offences. That is quite a haul, according to the Cambs Police webpage around 2,500 bikes were stolen in the city in 2009 and they recover 700-800 bikes a year.

On a less pleasant matter - a 12-year old girl was pushed off her bike and a 44-year old woman from Chatteris cautioned for common assault. I wonder if road rage is on the increase or not. I would classify this as road rage, since it was aggressive behaviour by a driver of a motor vehicle. Interestingly Wikipedia also has a definition for "Bike rage". I wonder what is going on, is there an increase in "road rage" incidents and what factors drive it. Is the problem correlated with the general stress of living or the increase in traffic congestion. I think that it is related to the latter and that the roads then become seen in a territorial way by road users -motorists and cyclists alike. Which then leads to territorial conflicts - this does not provide an excuse for transgressors but does make me wonder. I have been sworn at by drivers when cycling, I have been shouted at by youths passing close to me as they sped by in their cars. I have had water thrown at me (I hope it was water!). I have had cars deliberately drive at me even when I have the right of way on the road.

Small wonder that when I am looking to go on relaxing ride I tend to head to places where there are few motor vehicles and those there are tend to be very courteous. I find tractor drivers always wave their thanks and are happy to pull onto the verge to pass a cyclist. The country lanes are also much quieter, perhaps road noise is also a factor in inducing road rage! Talking of quiet places the Wicken Fen Vision has gained public support in the shape of a Number 10 petition. I am in favour and think that the changes made already have been most welcome. This includes the routing of NCN 51 through Wicken Fen and the more recent creation of the Lodes Way route. Here is a Lodes Way Brochure (in pdf format). If you look at the picture on Page 2 of the horse rider and cyclist passing each other on a small bridge - take my advice to cyclists and wait for the horse to go by.)

Now I am aware of the contradiction in my thinking - if the Fen is made more accessible then more cars will be attracted into the area and I don't like cycling with cars if I can help it. However I do believe it is possible to make the area open to horse riders, walkers and cyclists with peripheral access points for those unable to get to the Fens without their tin boxes. I also believe that whilst discouraging more cars into the area we must also ensure we don't make it worse for those living and working in the area. It is difficult to live in rural areas without a car we mustn't clog up their lifeline roads. I am impressed that visitor unmbers seem to be increasing, well if the number of cars in the Wicken Fen car park is anything to go by.

The Fens have a lot of history and have seen a lot of change. It now turns out that the last eel catcher in the area might be banned from following his calling for 6-months of the year. Stocks of eels are low and a ban for 6 months of the year is being imposed to try to protect the eel population. However if you follow the link you will see that there are sound reasons for modifying the ban on the chap involved to allow him to carry on. If you don't follow the link, well, it is to do with his method of trapping eels using willow traps.

So back to some cycling, the route is only a minor modification of others I have made before. This heads out along High Ditch Road before taking to byways to get to Lode and the Lodes Way - but this route heads off to Upware and then to Wicken Fen before returning along the Lodes Way through to Bottisham and NCN51. There is not too much road and most of the road there tends to be quiet country lanes. The route is around 50Km/ 30 miles and the elevation varies from 0m to 19m above sea level - so there are no hills to climb. One word of caution - the byways are great when it is dry but can become very slippery after rain - I almost fell of my Marin Hybrid with 25mm tyres at one point (I was getting too cocky and speeding along without paying any attention to the track.) 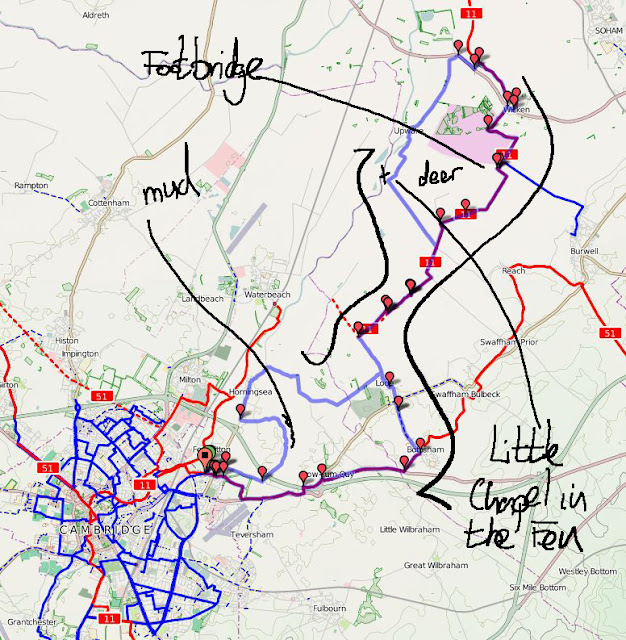 One of the things I like about the Cambridgeshire area is the number of information boards around and about, some in remote places, that give a flavour of the history of the area. Fen Ditton, at the start of the ride is one such place. The board indicates the the places was originally called Dittone - "the village by the ditch" - where the ditch in this case was Fleam Dyke, a pre-historic iron-age defensive construction. (In fact it is one of several such earth works in the general area.) I am ashamed to say that I have not really noticed the visible earth works alongside High Ditch Road - next time I must pay more attention. I can recommend the Ancient Shepherds in Fen Ditton, although I cannot find a website for them - is it just me or are pub websites buried under the large number of pub and restaurant catalogue websites, many of which I find of limited value. If you read the link one reviewer seems more worried about older male executives dining with pretty younger ladies than the Pub. I like it (the pub) and so does my wife - in fact she was there yesterday with a friend and they both enjoyed their lunch. 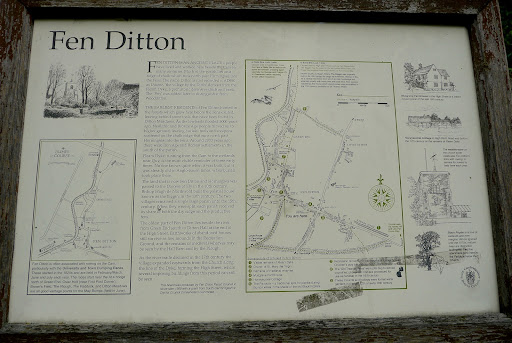 The byway (Low Fen Drove Way) has quite a few potholes along its way and on this day they were filled with water and so best avoided. I don't mind getting wet - I draw the line at bouncing over the handlebars though. I had to stop for this disk harrow (well to take a picture of it). Photomatix has just been upgraded to Version 4.0 and this is the first picture I have created using it. I am impressed with the changes /improvements/additions already. Amongst other things there are improvements to the noise reduction and the way in which ghosting is handled. 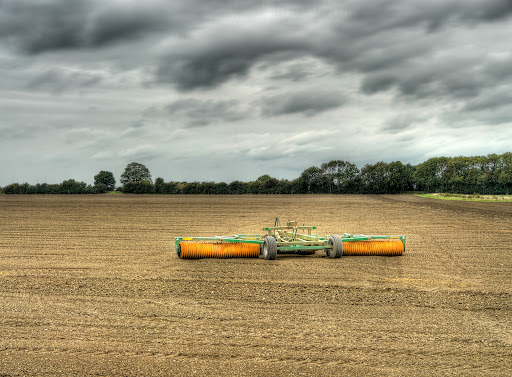 After the gravel track the byway become a more traditional farm track - which was in pretty good shape considering the rain. It was quite hard cycling though and the mud was sticky and clogged up my bike wheels. There is talk of siting a Waste Water Treatment plant near here though. 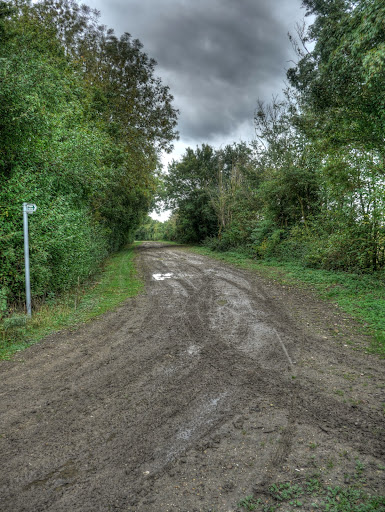 This is not the byway but heads off towards Allicky Farm (according to the map). Those wheel tracks are either MTB tracks or perhaps the small motorbikes I saw the other day. 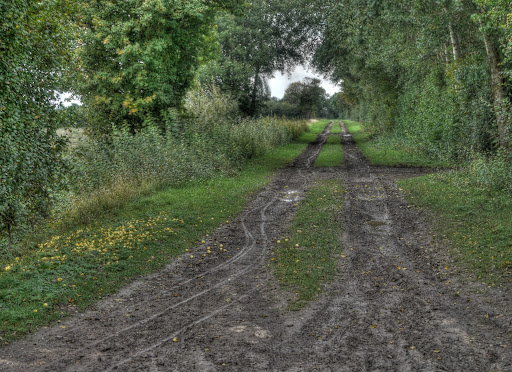 There are quite a few pylons in the area and already you can see this field, which was not long harvested now has the green shoots of the next crop showing. 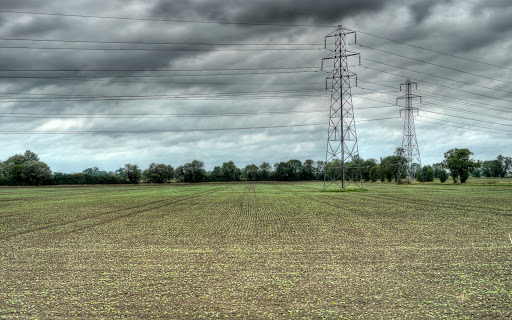 My route then followed parts of the Harcamlow Way on through Lode and White Fen. Whilst cycling quite fast along one of the paths I was too busy looking around me and my front wheel skidded away from me as I inadvertently changed ruts. For one brief moment I planned how I was going to fall before controlling the skid - it made my heart be a bit faster for a while though. There are quite a few fields along the Upware Road being used for growing turf - this is one. 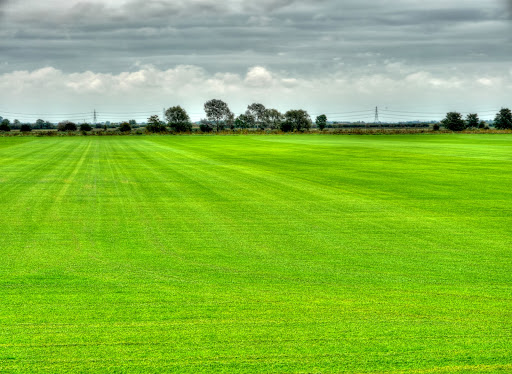 The Upware road has recently had some roadworks to flatten out the dips. although the cracks in the tarmac were not fixed - tough on cyclists, good for speeding cars! 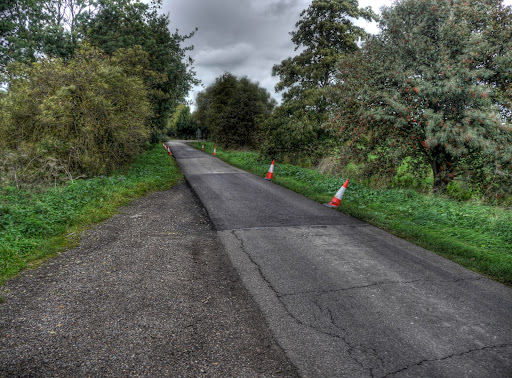 It is that time of year again for Harvest Services - this is the road leading to the Little Chapel on the Fen. For a report of last year's service see page 7. 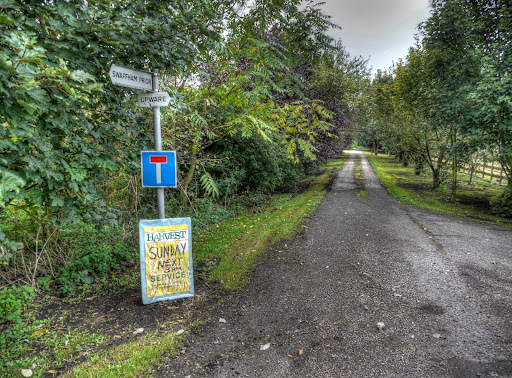 I mentioned that the start of the off-road section of NCN 51 through Wicken Fen (on the village side) had been re-surfaced. At the time I had to give it 5/10 - could do better. Well the path has now been fenced to segregate the construction traffic building the new Windpump. The start of the shared-path now only gets 3/10 - it has very loose large lumps of gravel and the bike squirms all over the place. You have to go quite fast to get the bike over the lumps (well I did anyway) but it has been temporarily narrowed and speed on a bike and walkers don't mix. 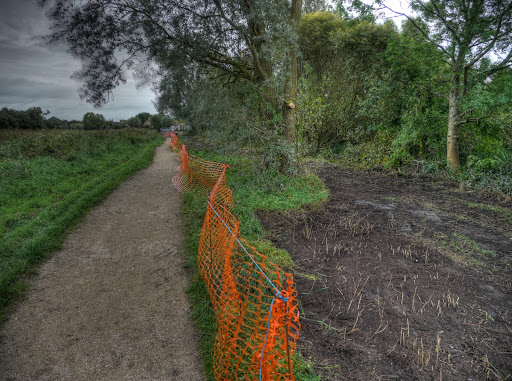 The start of the new bit of the Lodes Way occurs after crossing the old footbridge over Burwell Lode. There are ramps to help guide the bike wheels up the steps - but it is steep and my bike skidded down and then the back wheel tried to go over the handlebars. 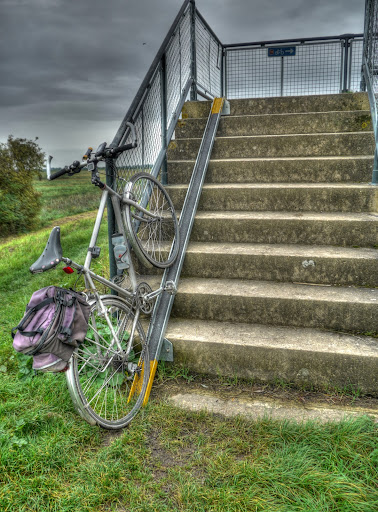 The path along Lodes Way through Burwell Fen (as it is signed) seemed a bit soggy and slower going than usual - although that might just be me. There is already signs of damage on the path, with fairly large hoof-prints in the track as you approach Reach Lode Bridge which is surprising. I did see deer on Burwell Fen, but as I have taken pictures of them quite a few times now I didn't bother this time.

I also did not take any pictures from Reach Lode Bridge either - partly because I have taken quite a few already and partly because it had started to rain (er actually mainly because of the rain).

The rain was not too bad though so I took a picture of this chap walking his dog down Swaffham Bulbeck Lode. I was on the new bridge and he was on the old footbridge. It shows the importance of circular routes. 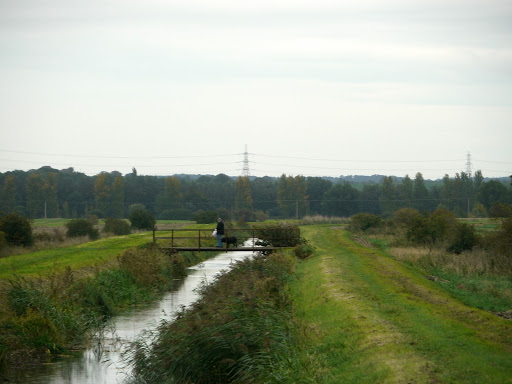 I also passed a person who is a regular car-based dog walker on White Fen Droveway.