Lodes Way now officially open - and jolly good it is too

September 12: Despite there being a Grand Prix on and it starting at 1pm I decided to attend the opening of Lodes Way Bridge (which was at the same time). So I recorded it and then watched it when I got back. I didn't mention that yesterday on my Lodes Way Loop I passed 38 cyclists, including 8 on the new bit of the Lodes Way - which I my mind just goes to show that there is a demand for quiet, safe and pleasant cycle routes - even here in Cambridgeshire.

When I popped out on my Marin to get the Sunday newspapers the back wheel felt squidgy and after pumping it up I was not convinced I did not have a slow puncture - so to avoid being delayed I took my Longstaff - quite muddy from its outing in Bath along the Kennet and Avon Tow path as is happens. It helped as there seemed to be a cool stiff breeze from the north and so the streamlined position helped. (I did wonder whether to put a jacket on but in the end just cycled a bit faster.)

In order to get in a reasonable bit of distance I cycled to Lode by way of Low Fen Drove and the Harcamlow Way - and passed around 5 cyclists on the byways. In fact right from when I set off there seemed to be more cyclists out and about and all waved or said hello. Perhaps it is always like this on a Sunday morning and because I normally cycle later on in the afternoon don't see all cyclists. I set of intending to get in a Loop before arriving at Reach Lode Bridge for the 1pm ceremony and then back to watch the F1 GP.

So I passed over the Lodes Way bridge around 12 ish and already there were cyclists gathering and the BBQ was being lit. I carried on through to Wicken Fen passing more cyclists arriving at the Bridge. When I reached Burwell Lode and the footbridge with ramps there was a traffic jam. A group of cyclists were making their way from Ely and there were people walking as well. I was a little surprised to see so much support for the Bridge/Lodes Way route. Since the Bridge facilitates a walking, riding and cycling route and is not that accessible by car it shows the need for car-free recreational areas.

My loop back to the bridge was through Burwell and then Newnham Drove (for such a bump track I do use it quite a bit). The gate was closed, as it was yesterday so I lifted the bike over and squeezed through - earning some comments from passing cyclists heading to the Bridge from Wicken Fen.

I arrived at the bridge (for the second time) to find it "closed" there seemed to be a game of Connect about to take place on the middle of the bridge and a "block the bridge" demonstration. It was the organisers way of focusing on the "Connect2" program which won lottery money to fund the connection of communities through people-friendly routes. as you can see the disks have the names of local communities - although the Swaffhams seem to have been forgotten? 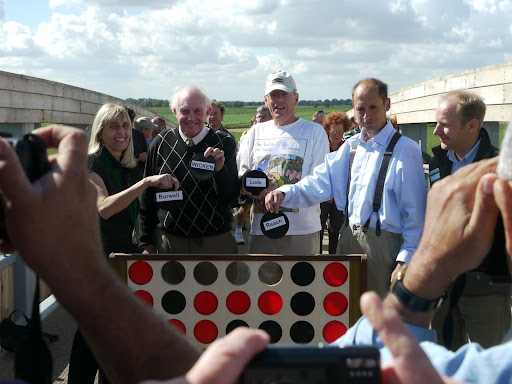 Two late-comers arriving from Wicken Fen - actually they weren't really late. Here in the flatlands this bridge represents quite a hill - one of them had to walk up it. 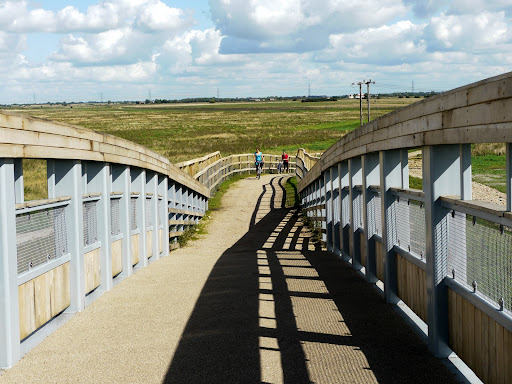 There were also a couple of horse riders along for the opening - both horses were very well behaved (as were their riders), The bridge at this point was a bit full so she is watching the opening from the bank of the Lode by the bridge. 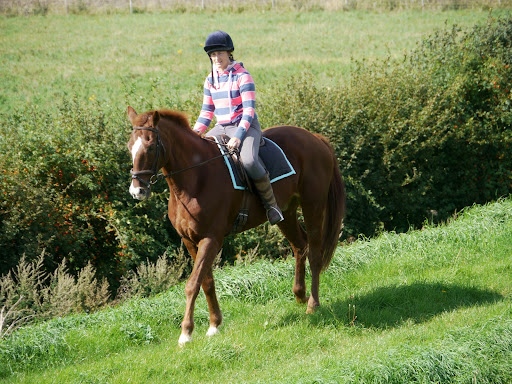 There were a couple of speeches - thanking the various bodies and people who made this all happen. This chap led the opening as is from the NT. 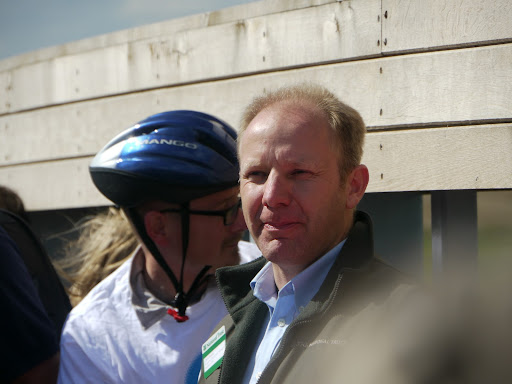 Then someone from Sustrans said a few words - the chap in the orange-red t-shirt. We then waited whilst various photographs were taken. (They did say who they were - but I forgot- sorry.) 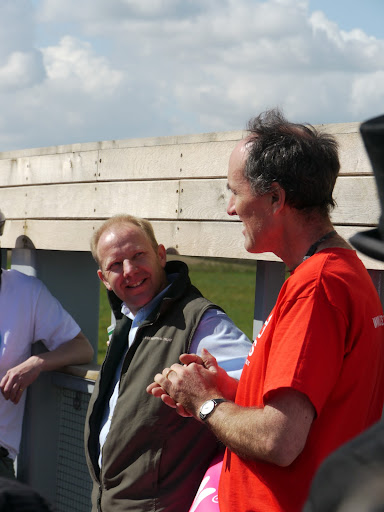 Then there were burgers supplied and cooked by Spinney Abbey Farm - one of the farms adjacent to the NT at Wicken Fen and a source of traditional meats - the burgers were delicious. I had long stopped counting bikes - but I reckon there were around two hundred people at the opening in total with say 150 cyclists - but that is a guess. There were bikes up and down all the surrounding fences. 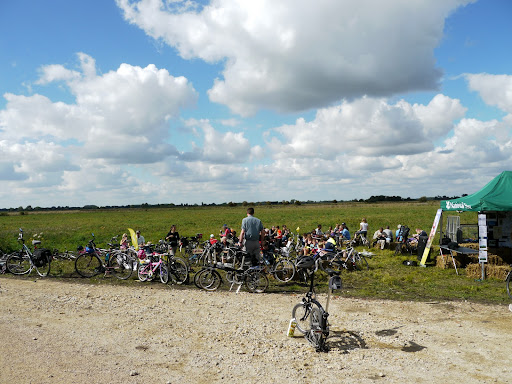 Some people dressed up for the event as well - that is a neat mini-Penny Farthing! There were other things happening with Guided Walks and stories for the kids and paddle boarding (I think it is called). I bumped into Mike C (not literally) one of those with involvement with the project. As he suggested in his comment he was indeed listening to the 5Live Radio Commentary on the Monza Grand Prix - so I did not stand too close to him - I did not want to unintentionally hear any news from the GP. 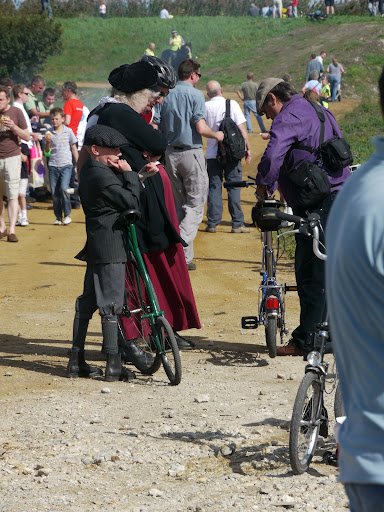 I then nipped home, still meeting people cycling along the Lodes Way - I also noticed that the purple flowers (spuds) were being irrigated - I guess the soil around the Fens does not hold the water that well as this is despite the recent rain. 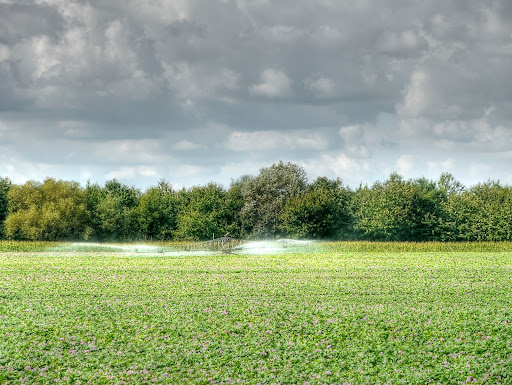 The clouds looked a little lively just after I passed through White Fen - but despite the cool north breeze it was actually quite a pleasant day. I did notice the breeze a bit more when standing on the Bridge for the opening. 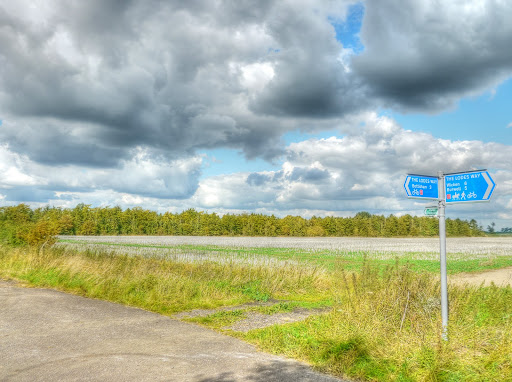 A final thank you to all those who got this route up and running and let's hope there are more to follow (and that the gates at Newnham Drove get sorted).