There was an old cyclist who swallowed a fly - I do know why!

A piece in the Cambridge News got me thinking about cycling and the issues that affect us. The article was "Child cyclist seriously injured in crash". A 14-year old was involved in a collision with a Jeep in Little Downham near Ely. It was a serious accident and the child was airlifted to hospital, however one of the comments suggests that the boy is now off life support. It is quite informative to read the comments - not so much for advice but to get a sense of what people think. There seem to be comments from both ends of the spectrum, including; the need for testing of cyclists (and car drivers regularly), more cycle lanes and forcing cyclists to use them and "cars and cyclists don't mix".

What interests me is why is there so much intolerance? Why do some motorists seem to hate cyclists even being on the road? Now I know that you should not take the results of a few comments as having statistical relevance - but even if this is what only a few motorists think it is disturbing. In my mind the problem arises from the marketed belief that buying a car buys you freedom whereas the reality is that it just gets you a place in the herd. I feel that motorists try to justify banning cyclists because of the safety issue - but it is really resentment against cyclists because they don't get held up in the same was as vehicles, in cities and towns. I am still firmly of the opinion that to make roads safer, motorists need to be made to drive more safely (and yes that includes me) by enforcing speed limits including 20MPH in towns and cities. I also think that cyclists should not be treated as second class citizens and be forced to give way numerous times on shared-use paths.

One thing I do know is that cyclists wobble, I do and have cycled for years and many thousands of miles. That is why cyclists need space when being overtaken. The causes of wobbles are often the poor road surface by the way. Driving in traffic when there are cyclists around requires more concentration and attention. Cyclists are often treated as second-class citizens. In the event of a collision the cyclist is far less protected than the driver. There is too much hot air about cycle helmets and not enough debate on how to make drivers safer.

I have been thinking about getting a "Cycle-Cam" to record some of the incidents that occur as I cycle (cars pulling out in front of me, overtaking with inches to spare at high speed, cars failing to give way to me...) This camera is so cheap I am very tempted, especially when I saw that a van driver was cautioned for assault, charged with driving without due car and attention and received five points and a fine. The incident was caught on camera being carried by a cyclist and so I assume helped in the conviction.

Other news that caught my eye is a bit about a "Walker trampled by cows" - a man was walking a dog through a field of cows when they trampled him on "common free land". I have seen this myself when I was a boy out walking a dog with a friend and his Dad. Some cows ran after us and the dog pulled on the lead so hard he pulled my friend's Dad over (we nipped through the fence). I have cycled through fields with cows in them quite a few times - I have never seen any interest in me from cows on Stourbridge Common or Wicken Fen even when going right through the middle of them. I do slow down a bit though. I have been chased by a group of cows whilst cycling through a field - I was listening to my MP3 player and heard a sort of galloping noise behind me - there were a whole bunch of cows running up to me (these were young and inquisitive). I was on a footpath - so not strictly within my rights as I was cycling, but just headed to the nearest gate and then nipped over it. The cows stopped short anyway. Growing up in Somerset I have seen cows jump fences, including one that jumped a fence and wandered into our garden and then into the house. It walked down the hall, into the kitchen, round the kitchen table and then back out again. Fortunately it did not leave anything behind.

I also see that a new road in Cambridge opens next month - it is a major connection between the M11 and the Addenbrooke's Hospital site and will have some sophisticated surveillance cameras (£250K) to ensure that it is not used as a through route! There are some inevitable comments about taxpayers funding a road that taxpayers cannot use. Although they can - but only when going to hospital!

I think that bicycles are eco-friendly means of transport - but one man in Potter Heigham in Norfolk is going one better and hoping to set the speed record for a bicycle made entirely of wood. Apparently anything between 25 and 30mph would be good. The bearings are the tricky bit apparently.

If some of my comments are a bit GOM-like (Grumpy Old man) then it is because my Internet connection is still running 100 times too slow. It briefly sped up a little last night when I managed to download these pictures but is back to snail pace again this morning.

I am not the only one writing about the Lodes Way, it has made it into the Independent Newspaper: "Cambridge to Ely: Not a hill in sight - that's what I call cycling". The author stays at the Anchor Inn (and restaurant) in Sutton Gault and samples local food - a pub I have cycled past quite a few times - including when the nearby river was flooding (not the pub though.)

I should have cut the lawn (Saturday 18 September). It was sunny and the lawn was dry - but the weather was also pretty good for a cycle ride - it was too inviting so no surprise that I went out via Horningsea and various byways to Lodes Way. I did notice that the bridge of the A14 on Low Fen Drove Way has had some repairs. A few months ago (May 2010) I noticed that the drain covers were missing from the bridge (around 20) and then a few days later that cones had been used to mark the missing drain covers. Well finally the drains have been replaced as you can see in this picture. I assume that it has been more firmly fixed in place judging by the tarmac around it. 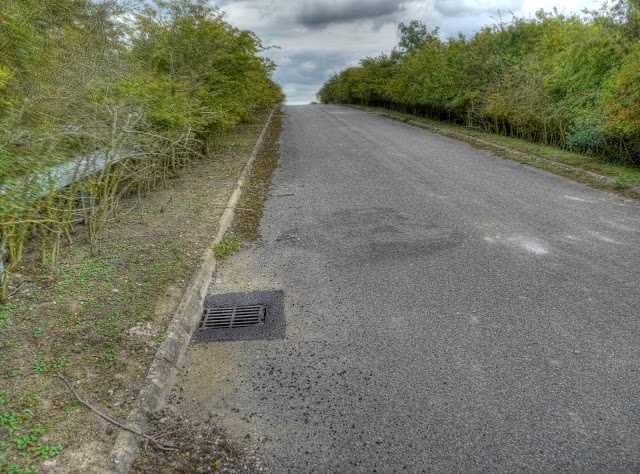 Although as I passed over the crest of the bridge I noticed that not all of the covers have been replaced on the far side the drainage holes appear to have been filled in. I guess this makes it even more impossible for the drain-hole covers to be stolen- although it begs the question why put them in if they are not needed? When and if I cycle this bridge in the rain I guess I will see streams down the edges of the road. 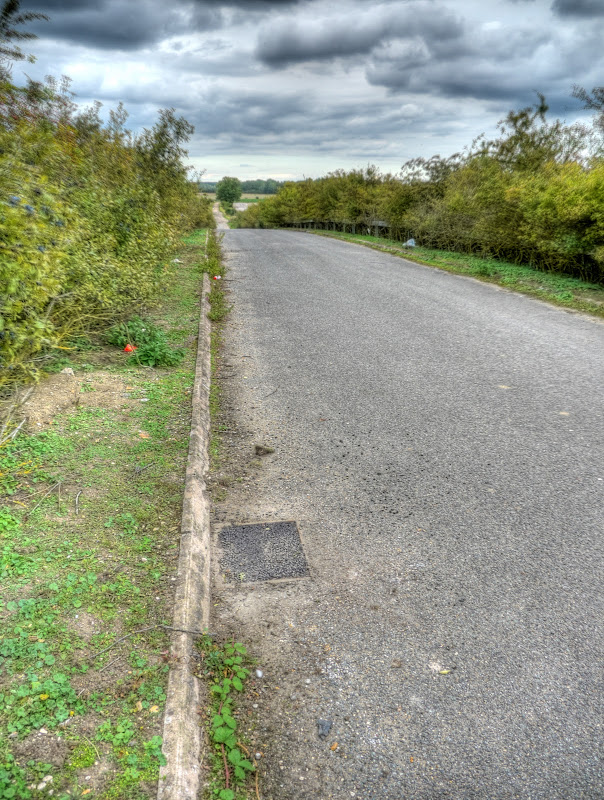 When I got to the Horningsea Road I popped up the, new but not yet open, shared-use cycle path to the A14 bridge where more of the cycle way is being built. I wonder whether they will modify the junction to put in a light-controlled crossing - since all that would be needed is lights to indicate when to cross as traffic can only travel out of the junction. It does not appear so from the plan on the CCC website. 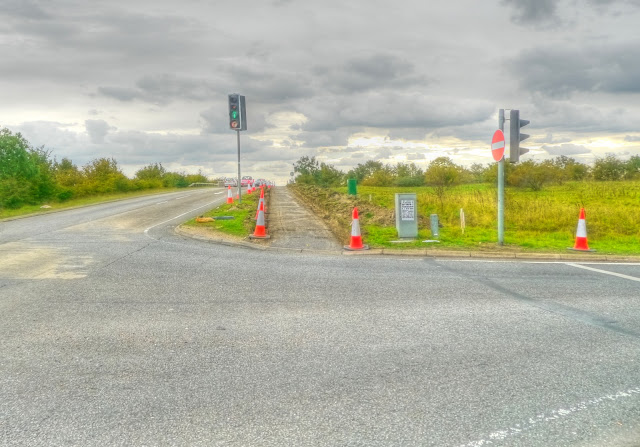 I took my usual route along the Harcamlow Way and then through White Fen - where I saw a "formation" of planes in the sky - they were too high in the sky to get a good look - but I assume were going somewhere for an Airshow. They look red in this picture and could be Tucano training aircraft I suppose. 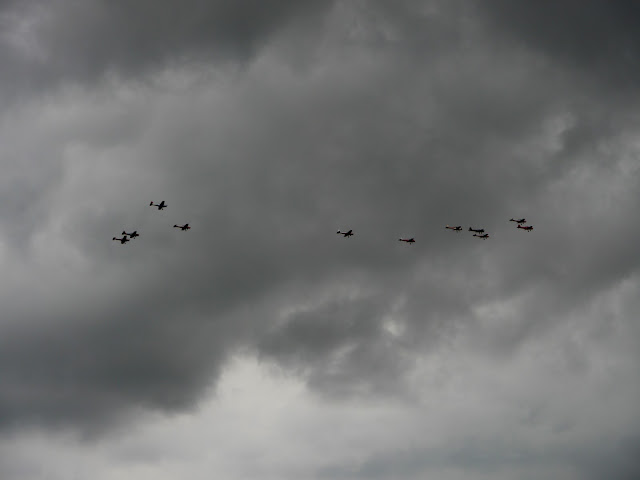 I mentioned that Headlake Drove (the bit between White Fen and Reach Lode Bridge on the Lodes Way) has signs warning it will be closed for repairs on 21 September for 2 days. Well this is Headlake Drove - they mark the bits to be filled with yellow paint. So I assume this crack will not be fixed. When cycling along here I cycle more to the middle of the road - but this is where you end up when passing an oncoming car or being overtaken - this causes me to wobble when cycling. 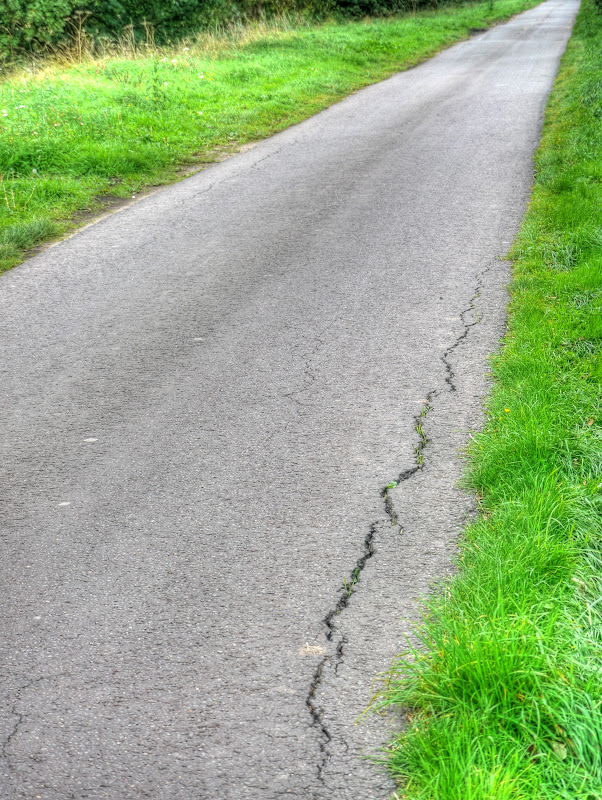 From the yellow mark up on the road it looks as if they will try to fill in some of the dips. As a cyclist I don't mind the dips, I don't cycle fast enough for them to be a problem. In fact I bet the agricultural vehicles don't either, so money is being spent to make the road faster for cars - when arguably it does not need to be fast? 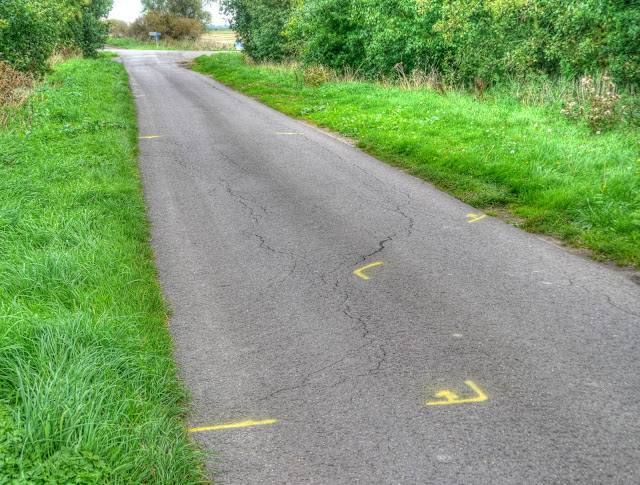 Instead of cycling of Wicken Fen along Lodes Way I detoured through Upware and then cycled around the back of Wicken village. I took this slightly bleak picture before I got to Upware but after River Bank. 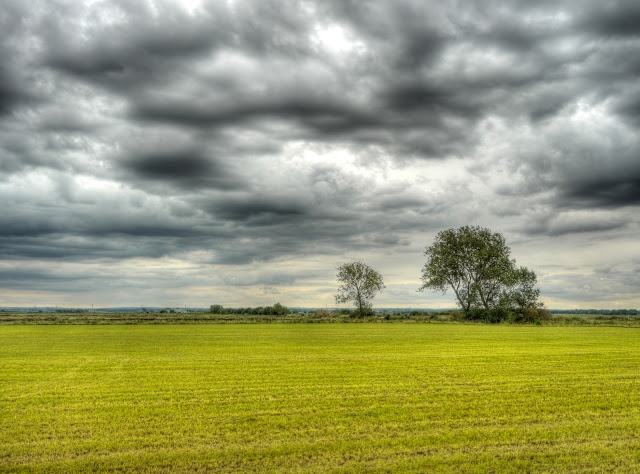 Oh yes - why the bit about the fly. Well cycling along the NCN11 around the back of Wicken Village a small gnat-like fly flew into my mouth and lodged somewhere in my throat. I tried spitting it out, I tried drinking and gargling - but it seems to have gotten stuck. I got some funny looks as I was cycling through Wicken Fen hawking and coughing - for such a small fly it was really annoying. I did managed to get rid of it before leaving Wicken Fen though - it looked intact as well - just dead. I fished it out with a finger and had a look once I had got it back up my throat.

I returned along Lodes Way, rejoining NCN51 to get back to Cambridge. There were not so many people around today four cyclists and a couple of dog walkers. I did see a dog being walked by car on the way into White Fen - it seems a popular spot for the lazy dog walker. I also passed some deer along Split Drove.

Normally when writing a Post I keep a few Internet windows open such as Where's The Path and Google Maps to check place names and routes - but my Internet is so slow that WTP has become unusable So forgive me for not including a BRT Map on this Post - hopefully I will get around to it when my Internet connection gets fixed.