September 23: I had a lunchtime meeting with a friend to discuss some ideas and at the time we set up the meeting I suggested the Dyke's End at Reach. There are a whole bunch of reasons; I like the pub, in the Summer the garden is a delightful sun-trap, in the winter they have a warming fire. The food and range of beers are good. Also, one of the most important reasons is it provides me with an excuse to cycle out into the countryside.

All that seemed great when a few days ago the weather was warm and sunny. On Thursday as the rain came down the idea lost a little of its brilliance. The trouble is my cycling has been a bit patchy for the last month of so. I am not sure quite where I am with regards to my target of 12,000Kms for the year and as the winter approaches it will get harder to cycle regularly. I record my cycling in a spreadsheet, which might sound a bit weird, but it helps to keep me cycling. The trouble is after August I have yet to update the spreadsheet - I have got the information on my computer just not in the spreadsheet. I have a Tablet as the "mouse" equivalent on my computer - a Bamboo Fun, although not as new as the one in the link and without multi-touch. I first started using CAD systems 30 years ago (A CALMA) and I like the precision of pen input - it is also great for editing photographs. It also allows me to hand-write stuff into my computer- so I keep my cycling data on a Windows Journal as hand-written notes. Normally I then add the info to my cycling spreadsheet every few days.

The person i was going to meet had already decided not to cycle out there and did offer me a lift - but it was too good a cycling opportunity, so with sandals, Lycra shorts and a rainproof jacket I set off. The rain was not too bad, more of a heavy shower and it was not cold so cycling in the rain was quite pleasant. I find once you decide you are going to get wet then it becomes easier - it is when you have you office clothes and no rain-jacket that it can get unpleasant. I used to cycle to school and occasionally I would get to school with wet trousers and they would have to dry as I wore them. I have also done that a few times in office clothes - normally after cycling to the Railway Station. The trick is then to get a seat on the train next to the heaters.

I had taken a fleece with me to put on if I was cold when I got to the pub - but did not need it. Another advantage of meeting in a Pub is they don't mind eccentric cyclists turning up - whereas restaurants would probably turn up their noses. The food was good and we had a lot to cover so the meeting went on for a while, until 2.30pm - kicking out time. By now the rain had stopped and so I decided to cycle the long way home from Reach through Burwell into Wicken Fen and then back along the Lodes Way. One snippet of information they have their own not-for-profit Broadband organisation in Reach - RaSP (Reach and Swaffham Prior Community Broadband + Upware.)

This picture was taken between Reach and Burwell where Burwell Road, Reach Road and Weirs Drove meet. Having seen changes in the NCN routing on the OSM Cycle map I wondered how the signage reflected the situation on the ground. It seems that the old NCN11 through Burwell and up to Wicken Fen is still shown as such as route [11] is still shown along Weir's Drove. I would have expected to see the route number in "(11)" if it were pointing the way to NCN11. Mind you the Cambridge direction also indicates NCN11 so who knows quite what system the signposts are following. At least we have them along with destinations and distances. The good thing is they are still being shown as NCN cycle routes! 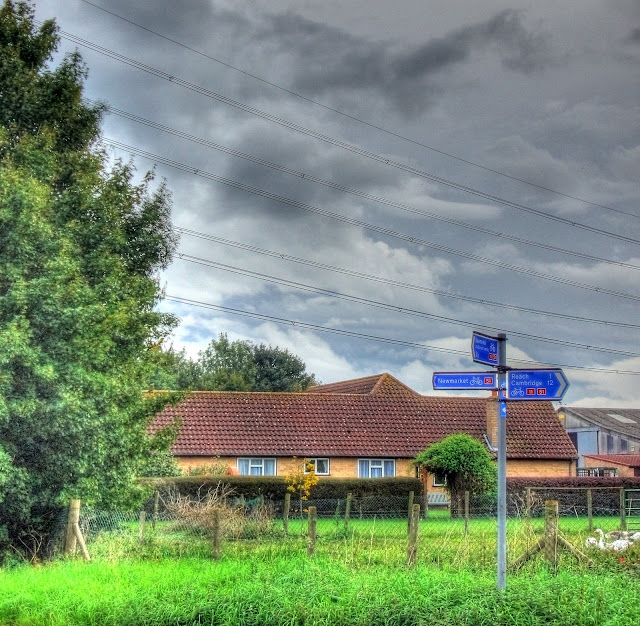 As I was cycling along Little Fen Drove between Burwell and Wicken Fen I noticed 7 deer in the field alongside Burwell Lode. (I only had my small Sony camera with me - which is why the deer don't get much of a closeup.) The picture is made up from two pictures stuck together using Photoshop Elements though. I wonder if the rising numbers of deer is going to be a problem in Wicken Fen or a welcome indication of the Reserve being successful? (At least my unscientific observations are that there are more deer around.)

I cycled along the Maltings Path into Wicken and then back through to the entrance of the Wicken Fen Reserve. They seem to have gotten the builders in and it looks as if some serious work is about to take place. Although I had a bit of time I was not really supposed to be just out for a pleasant cycle ride so as you can see not that many pictures got taken. It wasn't until I was half-way through Wicken Fen did I see an Information Board explaining what was going on. There is an old Windmill that is used to maintain the water levels in the Fen - but it is being replaced by a new wind pump to pump the water. Now this does not mean the old Windmill will be destroyed - just not used to pump the water. I imagine they will still keep it in working order though. 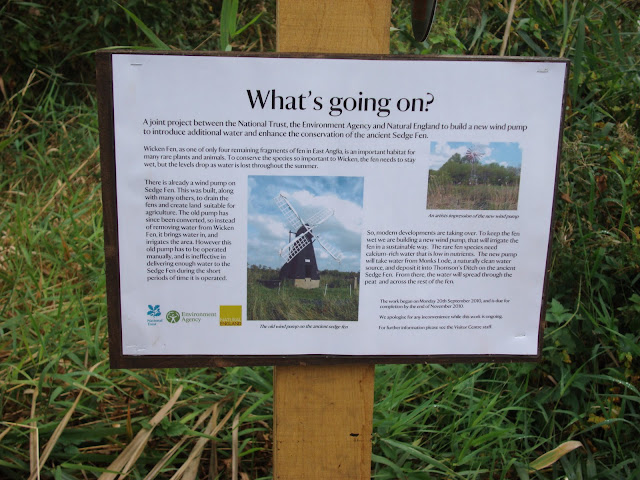 The roadworks along Headlake Drove had been finished and the dips flattened and some of the cracks in the road surface left untouched. So motorists will be able to drive faster and cyclists will still need to cycle with care - sounds a bit cock-eyed to me.

I took a picture of the digger on the other side of Swaffham Bulbeck Lode Bridge the day before, that work has finished and it is now on the North side. 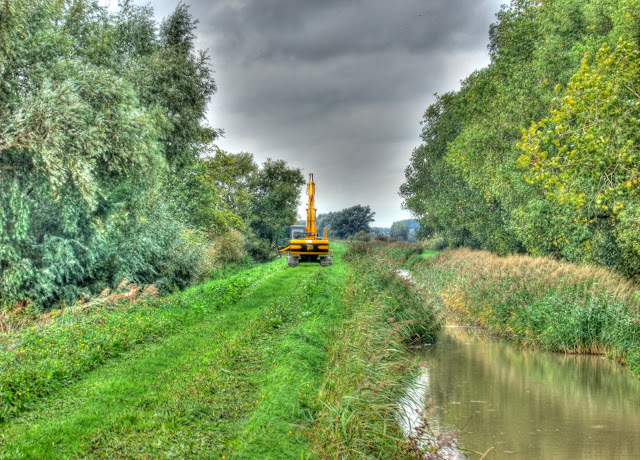 I got home having really enjoyed cycling to my meeting - it is great to "overcome" the elements - whilst cycling home having dried out.